Time is. Time was. Time is past. 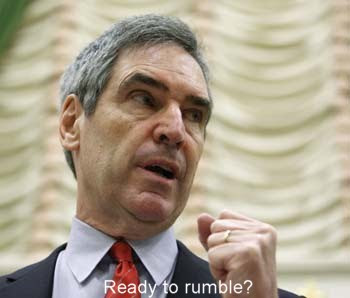 After all this time.

Stephen Harper's time is up.

At the first opportunity, we will move a motion of non-confidence in this government.

A few comments, first of all, on his Sudbury speech--which, admittedly, was a darned sight better than his flaccid Vancouver leadership acceptance one.

Ignatieff will enter the lion's den to make things right with China:

Stephen Harper has been prime minister for four years, and he's never visited China — the country that's on track to being the largest economy on the planet.

I'm planning to go to China because of what I heard on the wharf in Clark's Harbour, Nova Scotia, a few weeks ago. The fisherman there will tell you–if they're going to make a living, they've got to be selling lobster tails to Macao, not just the United States.

Ignatieff was to leave Friday for what he'd billed as an "imperative" international trip to Beijing and Shanghai to rebuild diplomatic relations with the Asian economic giant.

But Liberal insiders say he spoke Friday morning with Canada's ambassador to China, David Mulroney, who had been helping co-ordinate the trip, and postponed it for the time being. Ignatieff plans to reschedule the visit as soon possible, said a party source.

The Liberal leader has been sharply critical of the Harper government for what he called "bungling" the China file, but his own sudden cancellation may well be viewed as another snub.

Just last month, Ignatieff announced that his Liberal delegation would travel to China with the goal of "salvaging this important historical partnership right away."

So we're back, it seems--never mind his own undiplomatic bungling--to the bogus "constructive engagement" of the Chrétien era, which never kept a single dissident out of jail or saved a single life. Former human rights advocate Ignatieff will, if elected, back-burner the Tibetans, Uighurs and democratic activists in favour of increased trade. That's boilerplate Liberal foreign policy, it always has been, and no one should be surprised.

And speaking of political cynicism:

The only thing you get from Stephen Harper is broken promises.

Who can forget his promise not to run a deficit?

Talk about having and wolfing down his cake. The Liberals, as the economy nosedived, quite rightly forced the Harper government into a program of stimulus spending that they knew very well would cause a deficit, indeed quite a substantial one. It's just breathtakingly dishonest to rap the Cons for doing, in effect, the Liberals' bidding.

But at least Ignatieff has discovered--finally--that the Harper government doesn't treat all citizens equally. About time: his silence up to now has been shameful. It helps, of course, that the media have been all over Harper on this, and his government has been bitchslapped silly by the courts.

A Liberal government would stand by the Charter of Rights and Freedoms.

We would stand by our citizens.

And we would enact legislation to protect Canadians abroad–to make it illegal for the government to pick and choose which citizens it protects. [emphasis added]

The Ottawa Citizen's Don Martin sneers at this today, but, while his overall analysis of Iggy's announcement is sound, he is dead wrong here: standing up for all Canadians would resonate very well indeed in a country where every fifth citizen is foreign-born. Harper is in fact extremely vulnerable on this issue: his government has actively and maliciously discriminated against selected citizens, cheapened the very notion of Canadian citizenship in the process, and made headlines doing it.

But that legislation is already being drafted. NDP Foreign Affairs critic Paul Dewar is on top of it, and, if the Liberals really want to take the high road on this, they should simply support his bill. (I'm certain that Paul would be willing to consult on the wording details). After all, it shouldn't matter whose bill it is if Ignatieff really means what he says, right?

There should be little political risk in supporting it, either, given that, without the Liberals to guarantee its passage, it would simply fail as most private member's bills do. They could rightly take a lot of the credit for making it law.

Talk, as always, is cheap. A speech is just a one-off. Even a campaign issue is miles away from becoming actual legislation, and too many such promises fade once an election is over. Here, however, is a chance for the Liberals to act promptly on their words. But don't hold your breath.

Anyway, Iggy's mad as hell and he's not going to take it any more, but this sudden display of backbone after months of going along with the Cons even on core issues of principle like the pay equity and minimum jail sentences seems, in a word, irrational. He and his caucus have, of course, been richly mocked for continuing the sorry Dion tradition of acting like Conservative backbenchers, but the Sudbury announcement reminds me a bit of a kid who finally gets goaded into a licking.

The economy is nosing up. The Liberals are, at best, in a dead heat with the Conservatives. Since EI was plutoed, the Liberals have crafted no outstanding issue to take to the polls. And as for the Leader, his penchant for wandering out of sight for long periods makes him somewhat less than a household name. His timing couldn't be any worse.

Redeploying Henry Kissinger Abba Eban's words, Ignatieff in his new Liberal clothes has never missed an opportunity to miss an opportunity. And now he's grasping for one that simply isn't there.