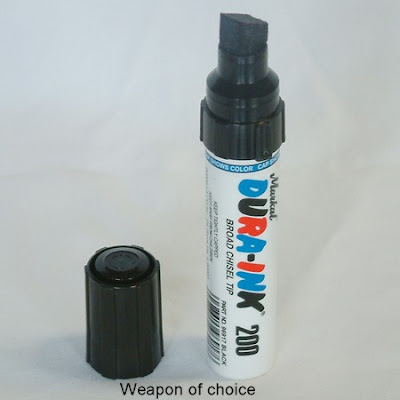 Freedom of expression ends, I would have thought, where someone else's epidermis begins. But I might be wrong.

It seems there's a whole new meaning to the phrase "poster child." If this punk wins, in any case, I have my felt-tip marker ready, slogans prepared, and conservative skins (pun intended) very much in mind.

There are Nazis all over Canada??!!

Oh wait: you don’t believe in private gun ownership, which leaves you pretty dickless in this fight.

Unless there’s no need to have such a fight.

Because you and I both know you’re just talking smack about “Nazis all over Canada.”

You can’t have it both ways. If they’re real, let’s get ‘em. They’ve got to be destroyed. I’m ready. Call me. I’m in the phone book.

But they aren’t real. This fake Nazi menace is as real as those “mass graves” you keep looking for, and “fire doesn’t melt steel”, and Lee Harvey Oswald wasn’t a communist, and that “DDT kills babies” shit and all the other self-aggrandizing BS you people have been foisting on us for the last century.

You’re just a moral exhibitionist with way too much time on his hands.

All that said: the minute you get in HRC shit, I, like Jay, will be there to help you out too.

Gee, we seem to be doing all the heavy lifting on our side, huh?

That would be the Half-Pint of Bitters, blowing smoke, as usual. It's all there: her trade-mark inaccuracies--who says I oppose private gun ownership?--her gaseous huffing and puffing, and what passes in her circles for wit (but on that, admittedly, they're half right). She obviously doesn't read the papers, either.

As it happens, I know who the players in this case are, but there's a court order in place so I can't provide names. But to help her out, I did provide several links to prove what she knew anyway, and challenged her to lock and load.

Instead, she turned tail and fled, which is what her sort do when facts rain down upon them.

Then Kate McMillan picked this up, and her anvil chorus of moronic commenters duly responded.

Well, fair warning, y'all. Mess with me and you'll be wearing it. My felt-tip pen, as noted, is loaded and uncapped, and my hand is steady. Power to the people! Peace now!

I'm just waiting for that ruling. Be very afraid.
Posted by Dr.Dawg at 9:54 AM