Red Librocons to vote for murder 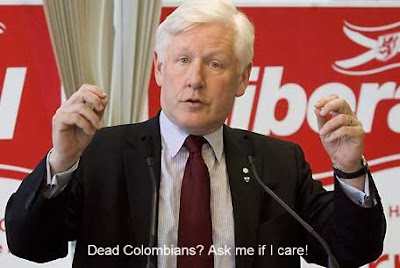 Second reading of Bill C-23--the Canada-Colombia free trade agreement--is likely to be a slam-dunk. The red wing of the Librocon Party has pledged to support its referral to committee.

Here is what red Librocon Bob Rae tells us:

Thank you for your message about the House of Commons debate on the ratification of the Canada-Colombia free trade agreement, with its side agreements on labour and the environment, together with an understanding on investment and taxation.

If there is no election, as a result of a decision by either the Bloc or the NDP to support the Harper government, it is indeed likely that this bill will go to committee, where there will be substantial discussions on the impact of the treaty. The Liberal Party will be supportive of the bill proceeding to committee, but further support will depend on satisfactory answers to our questions and concerns.

Bob recently had the opportunity to travel to Colombia, and met with business and trade union leaders, as well as leaders of non-governmental organizations and of course the Colombian government itself. Though better informed about the situation, Bob remains determined to listen and learn during the debate.

Unlike other parties, Bob is not ideologically opposed to all trade agreements which provide for freer and more open trade. Bob of course remains deeply committed to human rights and development, and is eager to hear competing views about the agreement.

Once again thank you again for writing to Bob with your concerns.

Office of the Hon. Bob Rae

Bob wants to hear the debate, does he? This former supporter of organized labour, who sat just a few feet from me asking for support when I was a member of the Ontario Federation of Labour executive board, will now be voting in effect to support the targeted killings of union members in Colombia.

On his travels, Bob must have learned that, of all labour union assassinations in the world, Colombia carries out 70% of them through state-supported paramilitaries. He must know--because the USW and other unions will have informed him--that 2,700 such assassinations have been carried out over the last twenty years: 27 so far this year. Along, inevitably, with 77 indigenous people, who have been displaced in huge numbers as their land becomes attractive to state-supported developers.

"Our members met with opposition parties in May and introduced them to a young human rights lawyer, Yessika Hoyos Morales, whose own father was one of the trade union leaders murdered," said [Ken} Neumann [National Director of USW]. The NDP and Bloc pledge support for her. "Her experience alone should be enough to move Liberals to doubt the wisdom of rewarding a regime that has not proven that it can, or even wants, to control its paramilitaries."

Neumann said the only right thing to do is to uphold a critical recommendation made by the Trade Committee, which calls for an independent, impartial and comprehensive human rights impact assessment before any consideration of free trade with .

"The parliamentary committee's recommendation has yet to be followed, while human rights continue to decline in ," Neumann said.

Colombian trade unions, whose members are being slaughtered, have not been silent:

A declaration by the General Labor Confederation (CGT), the Confederation of Colombian Workers (CTC) and the Unified Central of Labor Unions (CUT) says the only beneficiaries of the agreement will be "big monopolies such as Colombia Goldfields Ltd., B2Gold, Coldcorp Mining Inc. and the Frontier Pacific Mining Corporation." Neither Canadian nor Colombian citizens will benefit.

"The political, economic, social, cultural, ethical and environmental impacts will be catastrophic for a country like Colombia," the Colombian groups say.

I'm proud to report that my own union, the PSAC, has joined with other public service unions to demand that this deal with the rogue Uribe government be put on hold until an comprehensive human rights investigation of Colombia has been carried out.


But to the Librocons, none of this matters a damn. Corporate profit trumps the lives of workers and indigenous communities every time. No word as yet from former human rights advocate Michael Ignatieff, but it seems likely that he and his caucus will shortly vote to support the perpetrators of genocide and assassination.

After all, our American overlords are propping up Uribe's genocidal regime with a further $32 million approved this past Friday, bringing to $545 million the total going to Colombia this fiscal year.

NDP critic Peter Julian has a few words to say about this murderous array of forces against the poor of Colombia:

This summer, Liberal trade critic Scott Brison and foreign affairs critic Bob Rae travelled to Colombia, where they say they were convinced that sufficient progress on human rights is being made to warrant going ahead with the deal.

"They simply didn't meet with trade unionists," said NDP trade critic Peter Julien in a Parliament Hill interview. "When I went to Colombia, the government had a very carefully prepared plan - fake union leader, people who had been bought out, all cleared by the government... The message we got from real trade unionists was very clearly against the agreement... The human rights concerns are even greater now than they were two years ago."

Julien says Brison's claim that human rights groups have endorsed the deal is false. "Every reputable human rights organization on the planet has spoken out against this agreement," Julien told Straight Goods News. "Human rights organizations oppose this agreement. Labour activists oppose this agreement, and the people who speak out there are speaking out at great risk to their personal safety. So I am appalled at how irresponsible the Liberals have been. Bob Rae and Scott Brison are right wingers trying to pretend they've done their due diligence."

Indeed. Make no mistake: the red wing of the Librocons will be voting for murder--and lying through their teeth about it as they do so.

"Liberal trade critic Scott Brison stressed that the bill to legislate the Colombian trade pact is still to be scrutinized by the Commons trade committee."

where the LibroCons hold a majority

"It will hear from witnesses on any human rights implications - pro and con, he said"

having apparently already forgotten that Colombia Senator Robeldo told the International Trade Committee on March 26 this year that labour rights have indeed worsened this year and that signing the CanCol FTA will effectively "absolve, pardon, and reward" Uribe for his support of human rights abuses and will also condemn Colombia to even lower labour standards than they already have in order to compete with influx of subsidized Canadian foodstuffs, resulting in local farmers being unable to compete and losing their land.

UPPERDATE: And a lot more from Alison at her place. The sheer murderous cynicism of the Librocons has to be read to be believed. It was never about free trade: it was all about protecting Canadian mining companies.