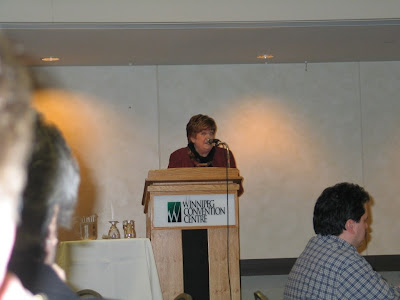 The recently-dumped Liberal candidate for Kildonan-St.Paul gives a pretty good account of herself in a letter to the Winnipeg Free Press today.

Six years ago, I wrote a column which examined evidence that the U.S. occupation of Afghanistan may have been motivated by the drive for oil and drug profits. As background, I reported that the intelligence agencies of Germany, Israel and Russia all warned the CIA that the attacks of Sept. 11 were coming, a fact also reported in the London Telegraph, the Jerusalem Post, and on Fox News. I noted that the U.S. disregarded the warnings, but Israeli businesses took them seriously, and (sensibly) vacated the Twin Towers.

The Canadian Jewish Congress seems to have assumed that I am one of those who subscribe to a bizarre conspiracy theory that the world’s Jews were responsible for 9-11, a ludicrous idea I have never supported. As a result of the Congress’s assumption, I have been slandered as an odious anti-Semite, a claim accepted by the prime minister, by the leader of the opposition, and the nation’s media. I have also been labelled an extremist nutbar who has promoted, rather than investigated, the possibility that 9-11 was an inside job. As a result, the voters of Kildonan-St. Paul have no Liberal candidate, and a narrower debate before electing their MP.

One hopes journalists will be asking two questions: 1) Who benefits from this hysteria? 2) Is it still possible for journalists to do the work of journalism, which is to “challenge the official story” in an atmosphere of fear and ridicule?

As one of the bloggers who challenged her candidacy, I have never considered Hughes to be an anti-Semite, and I have said so. I think the above speaks convincingly to that charge. I did take exception, however, to a specific comment she made, one that certainly appeared to me at the time to be a variant of the "All the Jews stayed away that day" meme.

In the letter above, there are some things with which many of us might disagree--for example, the pipeline discussion re Afghanistan is about natural gas, not oil. But I don't believe that it's common-or-garden nutty Trooferism to suggest that there had been warnings about the impending attacks--there's a substantial literature on this by now, of a non-conspiratorial nature, discussing various breakdowns in communications and agency rivalries. Hughes seems to me a little cagey, though, on the "inside job" nonsense.

In any case, in the spirit of even-handedness, I have reproduced her letter, and comments are welcome.