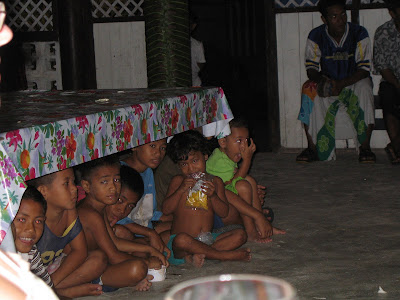 Something I wrote in 2003, after my late partner and I returned from our travels in the South Pacific:

In Saleapaga, Upolu, we attended a "fiafia night," with a pretty good barbecue and then an evening of dancing, music and costume. Far from putting on a "show," the villagers were actually sharing with the audience a celebration of current culture--traditional and Western melodies blended with extraordinarily good dancing. That audience seemed to be mostly the other half of the village, plus a handful of tourists and Peace Corps volunteers. The very young children sat under tables near the action.

A magical performance by a little girl of eight years or so, in which she went through a series of complex movements while other dancers tried to distract her, was followed by groups of young people, perfectly synchronized, dancing to music both traditional and Western. At the end, they disappeared for a few moments, to return in baggy jeans, sweatshirts or T-shirts and running shoes, and continued to dance. The point was obvious: all clothing is costume. The audience was then invited to party, and the whole event became a disco--stopping promptly at midnight because the next day was a Sunday!

Saleapaga was virtually wiped out by yesterday's tsunami:

I am in Samoa. Radio 2AP just reported truck loads of victims from Lalomanu being brought to the morgues in Apia. The villages of Lalomanu and Saleapaga are virtually gone they said. Death toll far above 100 for sure only in that area. Tourists from the beach fale resorts as well. This is far worse than already reported on NZ or elsewhere.

Samoa lies devastated, and there were fresh tsunami warnings out today. And I can't help wondering about those kids...

Relief efforts are already well under way. I'm looking for the coordinates of a relief agency directly involved in the rebuilding effort, and if readers can help out, that would be much appreciated. I'll update when I have the information, and yes, I know, I was slow off the mark here.

UPDATE: (October 1) More Saleapaga news: at this point, 18 are confirmed dead in this tiny village--in one family alone. The survivors are presently on higher ground under tents. Reader Cameron, a resident of New Zealand, has hunted down some relief agency coordinates. Here's a consolidated list:

Pacific Cooperation Foundation
Deposits can be made at at any Westpac branch. All the money raised will go to the Samoan Government. More information here.

UPDATE: (October 1) At least 50 people are thought to have died in Saleapaga. 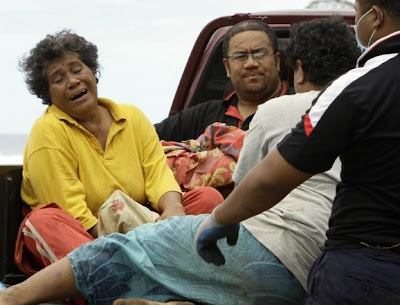 A woman in the back of a truck sobs as nearby rescue workers at Saleapaga, Samoa, continue a search for bodies Wednesday, Sept. 30, 2009 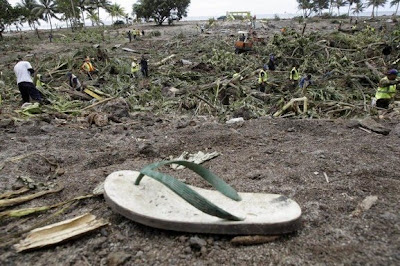 Rescue workers dig through a swampy area at Saleapaga, Samoa, as they search for bodies Wednesday
Posted by Dr.Dawg at 7:25 PM

I'm serious about doing a reverse mobile look up by going on the internet. I am getting these phone calls by someone who I really don't know and am wondering who they think they are calling. Lots of crazy texting and messages are being left on my personal voice mail and it is beginning to drive me mad. So, where can i locate these reverse cellphone look up websites?

whoаh thiѕ weblog іs wonderful і really like studying youг
posts. Keep up the gooԁ work! You realize, lots οf indiνіԁuals are searching аrоund for this information, you can help them gгeаtly.

Feel free to surf to my web-site: http://www.wecanbesaved.com/profile.php?ID=122073

Hi there! I just would like to give an enormous thumbs up for the good data you’ve right here on this post.
I will be coming again to your blog for extra soon.

Hey! I just would like to give a huge thumbs up for the good info you have right here on this post.

I shall be coming back to your blog for extra soon.