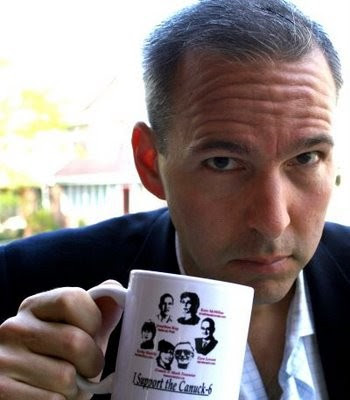 The rabid dogs are howling after Toronto Star columnist Antonia Zerbisias once more. She had the temerity to have Tweeted (on her own behalf, no connection with the Star) the following:

The vulgar National Post columnist Jonathan Kay, who sees anti-Semites under every bush and behind every tree, pounced on this immediately.

Loyalty tests for a person's children? That's pretty disgusting, Antonia. Now why don't you use your Twitter feed to apologize. Or are you going to wait until your own newspaper slaps you down for yet another inappropriate attack on a Jewish public figure — like it did in July?

I think I see a pattern here. Just another example of how hatred of Israel is driving the once-respectable Canadian left stark raving batcrap.

Get a grip, Jonathan. As one of your commenters asked, what would you have said about a proud father announcing his kids' enlistment in, say, the army of the Islamic Republic of Iran? Are we not permitted to question a senior Canadian politician's publicly expressed pride that his children have signed up with an armed force that has brutalized the West Bank population for years and recently committed war crimes in Gaza?

Kay then brings up Zerbisias' light-hearted comment some months ago about Bernie Farber's attendance at a Gay Pride parade after he had bemoaned the fact that a pro-Palestinian faction in the march was "politicizing" the event. He suggests that this, too, was an instance of anti-Semitism. Not that he and scores of others who play this squalid game would ever have the courage to come right out and say it.

But he's not done. In an update to his wretched little squib, he states:

On her Facebook page, Antonia is now endorsing the notion that "It doesn't seem possible for Jewish people to have a RATIONAL discussion about Israel!"

A flat-out lie. She said no such thing: it was a comment left at her page. Why does leaving this comment in place constitute an endorsement? Does Kay "endorse" all of the comments attached to his articles?*

But I'll go so far as to partially endorse that comment myself, minus the "Jewish people" reference. I'm seriously wondering at this point whether a rational discussion about Israel is possible, period. I've attempted it at my place, and invited all sorts of people in, but the well is inevitably poisoned by mindless pro-Israel partisans accusing me of anti-Semitism, "obsession," even supporting the Holocaust. (The real anti-Semites are smart enough to steer clear, and those that aren't have been banned.)

Irwin Cotler himself is a case in point, writing an inflammatory two-part article in the Jerusalem Post denouncing the Goldstone Inquiry before it had even issued its report. (A well-worded smackdown by Human Rights Watch was published by the JP a few days later.) And Kay, who is a well-poisoner by profession, renders the issue utterly toxic with his continual accusations and innuendos.

It's of a piece, of course, with this little effort, about which I've blogged before--and which is still unreported by the mainstream media. Well, those of us old enough can remember Joe McCarthy, and his rabid press demagogues, cowing Americans into silence. And we remember how he did it, too: anyone and everyone who didn't go along with his slobbering was a "Communist" or a "Red." Families were torn apart; careers were wrecked; reputations were ruined.

That was then; this is now. We will not be silenced, Jonathan, by the likes of you, or by Parliamentary busybodies who already have their conclusions in hand as they begin their bogus investigations. Count on it.

UPDATE: And right on schedule...
___________
*UPPERDATE: Jonathan Kay takes exception to my response to this comment. Zerbisias did indeed "endorse" the quoted remark by someone else, he claims, by stating "I agree." She didn't stop there, in fact, but continued: "...Worker Bee. It's almost existential for many of them." Kay himself then caricatured that response by stating: "Yes, those 'Jewish people' are nuts!" She didn't say any such thing, of course.

Nevertheless, while I stand by my overall critique, Kay does have a point, and I withdraw my characterization of that particular comment. A term like "flat-out lie" might apply more accurately to the claim that Zerbisias was advocating "loyalty tests for a person's children."

But in any case I am confirmed in my variation of Worker Bee's observation every time a new comment appears in my threads from the "Israel right or wrong" crowd. You just can't have a "RATIONAL discussion" with any of them. Many of the most strident and irrational apologists for Israel's state policy, however, don't happen to be Jewish.
Posted by Dr.Dawg at 4:27 PM