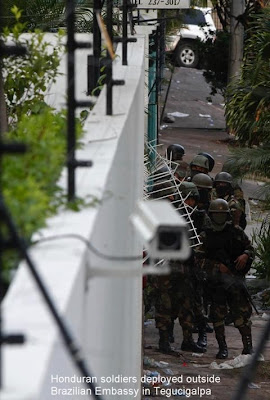 The elected President of Honduras continues to hold court in the now-besieged Brazilian Embassy, while, world-wide, a meme is circulating that originated in the Miami Herald: Zelaya is complaining about being gassed and irradiated, and somehow Israeli mercenaries are involved as well.

I read the story when it first broke, and it looked like something that might appear in the Onion. If it was serious, which I wasn't sure of at the time, I figured it might prove to be another "Hamas brings back crucifixion" or "Iranian Jews must wear yellow stars" kind of fantasy.

Well, it appears that much of the story is true--but as always, context matters. Wired magazine has the straight goods.

The gas that Zelaya complained about is likely the tear gas deployed by the troops surrounding the Embassy to disperse pro-Zelaya crowds. Zelaya addressed them from an Embassy balcony, and (I can testify from experience) just a whiff of the stuff will indeed make your throat sore; it also tends to hang around for a long time.

Forced into exile in a coup three months ago, Zelaya sneaked back into the country on Monday. He gave speeches to crowds of supporters from an embassy balcony, calling for a peaceful solution to the current crisis. Recognizing the risk of a popular response, the coup leaders sent in security forces to clear the area using tear gas and water cannon. According to the Guardian, twenty people were injured and at least 170 detained following the disturbance; the BBC say that at least one person died.

As for the "radiation":

The embassy is now surrounded. Water, electricity and telephone lines have been cut off. Embassy staff were permitted to leave, but access is now restricted. According to the BBC the embassy occupants have no soap, towels or fresh clothes and are surviving on biscuits. These are fairly routine methods of making the subjects of a siege feel isolated and uncomfortable, but an added dimension has been added by the use of noise.

According to Reuters, a truck-mounted speaker was used “to blast the embassy with harsh sounds.” The Guardian describes the speakers as being used to generate “high-pitched noise.” The Miami Herald cites witness reports that “soldiers used a device that looked like a large satellite dish to emit a loud shrill noise.”

The device seems to have spooked Zelaya; in the Herald report, he claims that he is under attack by some sort of radiation weapon. This reminds me of someone I talked to who once told some protesters that the LRAD sonic blaster emitted radiation that would shrivel their testicles. He was impressed at how fast they got out of the way.

More here, with links. And the mention of "Israeli mercenaries," it seems, may have some foundation too. (This report in Spanish refers to "Israelis operating in the country," and claims that "a retired Israeli general" is in charge of the current military operation.)

Is this all paranoid, anti-Semitic delusion? Likely not. More than two decades ago, in The Israeli Connection: Whom Israel Arms & Why (1987), author Benjamin Beit-Hallahmi noted (p.xii):

Mention any trouble spot in the Third World over the past 10 years, and, inevitably, you will find smiling Israeli officers and shiny Israeli weapons on the news pages. The images have become familiar: the Uzi submachine gun or the Galil assault rifle, with Israeli officers named Uzi and Galil, or Golan, for good measure. We have seen them in South Africa, Iran, Nicaragua, El Salvador, from Seoul to Tegucigalpa, from Walvis Bay to Guatemala City, from Taipei to Port-au-Prince, Israeli citizens and military men have been helping, in their own words, in 'the defense of the West'.

Israel plays Realpolitik like any other nation, and it has an increasing stake in South America these days. That's fact, not fantasy.

So what originally appeared as the ravings of a caricature of the "loony Left" needed only a bit more context to become intelligible and reasonable. Carry on, Manuel: but I'll admit that you did have me worried there for a while.
Posted by Dr.Dawg at 11:34 AM