"My dreams are gone" 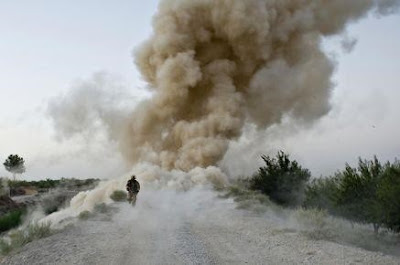 Time for a healthy dose of Realpolitik--the same fodder that the Afghanisnam hawks have been shoveling down our throats since our "mission" began.

I won't apologize for the scare-quotes, either. It's been sold like those old-time missions, all righteousness and hallelujah and pie in the sky. The missionary zeal at The Torch, and at Terry Glavin's School for Cheerleaders, has been something to behold.

Meanwhile, the bombs continue to rain down on civilians. We're losing the ground war. The puppet president there just hasn't been a very good Civics 101 student.

And we've made deals with the devil to get as far as we have.

Item: Afghan soldiers raping boys (a war crime) on a Canadian Forces base.

Our troops were told to ignore it, as reported more than a year ago. I blogged about this back then, and noted that Rick Hillier, in charge at the time, had stated that Canadian troops were not to stand idly by and let these atrocities happen.

A military Board of Inquiry was convened--it's still under way--to examine a single incident reported in the media. A tortuous article appeared at a Canadian milblogger site, explaining that this is an Afghan thing that re-emerged after the Taliban put a stop to it, and that charges of Canadian complicity in it were new, very serious, and thank goodness the Board of Inquiry had been called.

Meanwhile (and I can find no mention of this at The Torch) the Canadian Forces National Investigation Service had a looky-see and concluded that all charges of complicity were unfounded:

The newly released records raise questions about a military investigation that earlier this year concluded that allegations about sexual abuse of Afghan children by members of the Afghan army and police were unfounded. The Canadian Forces National Investigation Service also stated that its thorough investigation concluded allegations of such incidents were never reported to Canadian military commanders.

Lies, all lies. And then this unmitigated crap:

Having sex with children is against the law in Afghanistan, but some military officers have argued that since it is practised by some Afghans, particularly in Kandahar, then the Canadian Forces should not get involved in what should be seen as a “cultural” issue.

This just takes my breath away. For how long have the anthropological illiterates on the right side of the aisle been accusing progressives of "cultural relativism," not having a clue what the term means, but evidently confusing it with moral relativism? And what are we to make of the fact that child rape is a crime in Afghanistan, always has been? Is that "cultural" enough?

(Not to get sidetracked, but people who talk about "culture" should do some serious reading and thinking to avoid uttering such claptrap. Is NAMBLA "cultural?" What about US anti-pedophile laws? Are they "cultural" too? Who are the culture-bearers? Are alleged "cultural traits" decided by majority vote? Good grief, where to start. Anyway, moving right along...)

He said a thorough review of military police records showed no complaints were made about the issue and “all the allegations were unfounded.” Bolduc noted that the investigation found the sexual abuse concerns were never reported to commanders.

And even more lies, from the Conservative politicians running the show:

Last June, Defence Minister Peter MacKay told the House of Commons that troops would not turn a blind eye to the abuse of children. “Let us be clear, in no way, shape or form have Canadian soldiers and certainly the Canadian government ever condoned or excused allegations of sexual abuse against children in this country or anywhere else,” he said.

As it turns out, DND brass were in the know when the story first broke last year. First they thought of outright denial. Then they crafted some talking points to get themselves off the hook. Then came a bogus NIS investigation and a narrowly-mandated military Board of Inquiry that is dragging on to this day. And no doubt Man-love Thursdays are still destroying the lives of Afghan kids, right under our noses.

Item: The deteriorating status of women in Afghanistan.

In today's Globe and Mail, some heart-rending accounts from the women themselves.

In the span of about one year, the 15-year-old, named Sitara, has been yanked out of school, off a path that hinted at promise, and sold by her father for 700,000 Afghanis (about $15,000) into a marriage that, already, she has “nothing left for.”

Read the whole thing and weep--not just for the women, some of whom by now even long for the return of the Taliban, but for our soldiers, dying in a pointless cause.

Realpolitik? Get out now and cut our losses on every front: military, social, political. The war is useless, unwinnable, fueled by ideology and wild hopes and cockeyed optimism.

The cheerleaders are still cheering, but the cheers seem a tad muted these days. And from beyond the grave, here's a healthy dose of realism. How many more such voices of the dead will we have to endure?
Posted by Dr.Dawg at 10:04 AM