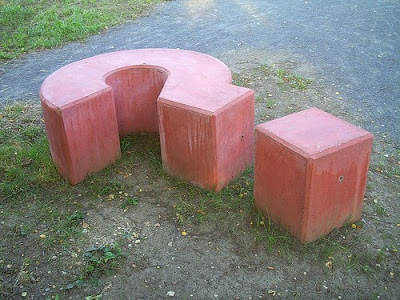 Things have moved forward at breakneck speed since I first wrote about a proposed monument to the victims of Communism back in July. In fact I feel that I was remarkably prescient then, if in a rather odd way.

At the time, I suggested that selective memorials of this kind were generally unproductive. It seems that the National Capital Commission, whose approval is required, has now taken that message to heart, but it's gone the other way. If we don't want a memorial that focusses on Communism, why not have a monument to commemorate the victims of, well, everything bad?

I have to admit that, on my first run-through of the article in the Citizen, I thought I was reading a good piece of satire. I enjoyed a laugh or two, and then a lot more as I realized that the satire was in fact an objet trouvé.

The [National Capital Commission] board passed a motion supporting the concept of the commemoration, “but perhaps with a different title,” after objections about the title were raised by nearly all members who spoke.

After beginning discussions with the NCC in March 2008, the groups had back-and-forth discussions with a committee of experts who suggested that the title be changed because it could be perceived as "unduly critical of Canadians who might associate themselves with communism," Egan said.

The group then changed the name to include the word "totalitarian." The title still did not sit well with the board.

"I was unsettled by this name, and other members of the committee agreed with me," said Hélène Grand-Maître, speaking in French. "We should make sure that we are politically correct* in this designation."

Board member Adel Ayad said the name was troubling for its "very tight definition" and for the presence of the word "communism" in the title, as Canada has a communist party.

"It’s not communism itself that we should be fighting here. It is rather totalitarianism we are against in any form," he said.

Some also suggested that the monument should focus more on Canada as a refuge for victims of oppressive regimes.

Ah, the joys of collective decision-making--I feel positively nostalgic. And also, for some reason, as I wipe tears of laughter from my cheeks, glad to be a citizen of this charmingly maddening country of ours.

For example, I want to lose 5 pounds of fat by
February 25th. Skiing and snowboarding are strenuous sports which demand a lot of endurance, so your usual set of ten to
fifteen reps really isn''. Visit a Dermatologist: If you are facing any chronic skin problem like pimples, acne and blemishes then consult a doctor at first place before going to a beautician.


Here is my web site; click the up coming document

Most of you hunger to know more about the glitzy life styles of glamorous celebrities and
sensual models. Women who are planning the wedding of their dreams can find plenty of fantastic information
in Bride’s magazine. He covers gossip on celebrities, actors
and musicians.