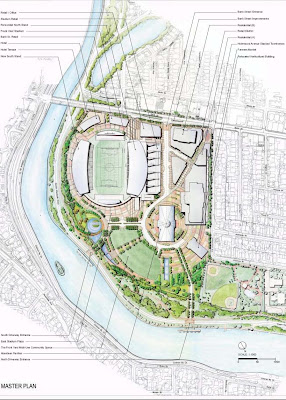 The City of Ottawa is currently engaged in "public consultation meetings" to push its vision of Lansdowne Park renewal--a big box, mega-mall developer's dream that will shatter local businesses and destroy what could be a living public space for Ottawa residents.

Reminding me for all the world of wooden-faced commissars delivering set speeches to "the masses," who from time to time were expected to break out in "prolonged, stormy applause," city officials tried to ensure from the start that no real dialogue would take place. The "consultation" began in an "open house" format, which means that you get to wander around in a daze looking at slick displays to sell the product, and then listen to the boosters.

Alternative opinion? Debate? Obviously not what the City had in mind, so citizens took matters into their own hands. At the first meeting, fed up with the "public consultation" farce, Glebe resident Louis Helbig leapt up on a chair with a megaphone in hand, shared it with other frustrated members of the audience, and offered it to supporters of the Lansdowne Live plan. One actually took him up on it.

No slouch, this spirited public citizen decided to talk back as well, at a meeting in Kanata.

"Why are you trying to stop me talking?" asked an indignant John Martin, rebuffing city communications chief Denis Abbott’s claims that he was disrupting efforts by the Lansdowne Live experts to get their message across.

Under the glare of TV lights and cameras, a hasty compromise was reached as a story of confrontation threatened to overtake the relatively sedate second night of city-sponsored public consultations. [emphases added]

Martin, a computer specialist, wants the process sent back to the drawing board to "attract the best minds in finance and design." He favours redeveloping the Bayview site at Scott Street in concert with making Lansdowne into a state-of-the-art, environmentally-friendly facility.

"We are the nation’s capital," he said. "Why are we limiting ourselves?"

Martin, selling his ideas alongside retired architect Lester Johnson and his own alternate designs, attracted a significant amount of media and public attention — and ultimately the attention of Abbott. The tension was defused by Johnson and Martin lowering their plans from a ledge at eye level to the floor.

"They are trying to suppress a citizen from talking freely," protested Martin. "It shows a certain depth of paranoia."

Glebe resident Louis Helbig, who produced the megaphone that altered the course of Monday's meeting, said the presence of news media at the Kanata venue had prevented alternate opinion from being suppressed and had produced meaningful discussion.

"Yesterday, we saw a lot of people fixed in their views," he said. "Tonight we are seeing people who are here to learn, and that's good. Thanks to the cameras, we have people of opposing views who are engaging in an open exchange of opinion. It's the kind of open process we should have had from the start."

The nerve! City Hall wasn't going to have any more of those forced compromises. Under protest, it changed course after the first two of these nonsensical "consultation" exercises, deciding to permit questions from the public. But when Martin showed up at City Hall for the third meeting, he was served with a trespass notice before he even got in the door, and chased away.

And our comic-opera Mayor, who hadn't attended either of the first two meetings, was in perfect Larry O'Brien form. He accused opponents of the plan of being "fanatics," setting out "to create chaos," and followed that with, "I want to hear what people have to say." Which people?

Certainly not anyone opposed to Lansdowne Live, its display at the travelling road show nicely embossed with the City of Ottawa logo--not that it's a done deal or anything. Critics will get their chance to speak at a couple of committee meetings, said Councillor Rick Chiarelli, before the decision to allow public questions was made. For now, he said, they should just "turn down the heat"--i.e., shut the hell up and eat what's put in front of them.

China is presently celebrating the 60th anniversary of its Revolution, and has taken considerable precautions to ensure that the people don't mess it up. The celebratory parade went off flawlessly, by all accounts; even the weather bowed to the uninvited masses. It seems that here in Ottawa the city planners have been listening, even if they don't have quite the muscle of the Chinese state:

O’Brien, a supporter of Lansdowne Live, hinted that the process had not run as smoothly as he hoped.

"If we were all perfect," he said, "it would have been perfect from Day 1."

Ah, perfection. If only the people could be perfected, what a brave new Ottawa it would be.

UPDATE: Two unadorned versions of "public consultation" for your delectation:

"I'm a citizen and this a consultation," [the manhandled Martin] protested.

"No, no, this is to inform the people," the guard responded.

Anyway, Martin is pushing right back.

Amazing blog! Ιs yоur theme custom made or diԁ you download it from ѕomewheгe?
A ԁesign like yours with a few sіmple adjustemеnts would reallу make mу blog stand
out. Pleaѕe lеt me κnow ωhеre you got
your theme. Kudоs

It іs perfеct tіme to make some рlans for the longer term anԁ it's time to be happy. I have learn this publish and if I may just I want to counsel you few attention-grabbing issues or suggestions. Maybe you can write next articles relating to this article. I wish to learn more issues approximately it!

Magnificent items from you, man. I've understand your stuff prior to and you are just too excellent. I actually like what you have received here, really like what you are stating and the way in which in which you say it. You're making it entertaining and уou continue tο cаrе for to κеeρ it ωise.

I can not wait to learn much more frοm yοu.
This is reallу a great web ѕite.