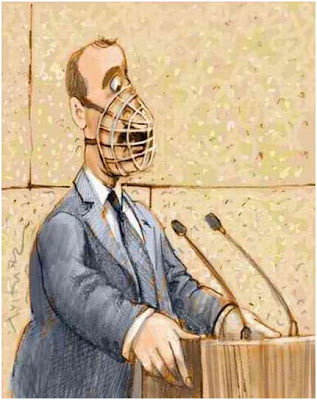 More on the travails of Kevin Page, Canada's first Parliamentary Budget Officer. Far from the officer of Parliament that we had every reason to expect, this highly-qualified individual has been reduced to a flunkey for the parliamentary librarian:

Canada's new budget officer has been told he can't release any report to MPs, senators and taxpayers without the approval of the parliamentary librarian.

William Young has reportedly laid down the law in a blunt letter to Kevin Page that severely restricts what the office staff can do and say. One official described the letter as "nasty," falling short of requiring the office staff "to get the library's permission to use the washrooms."

While some of this is clearly attributable to turf-wars within the parliamentary bureaucracy, Prime Minister Stephen Harper could put an end to this, pronto--if he so chose.

So far, Mr. Harper hasn't helped the confusion. He promised an "independent parliamentary budget authority" in his 2006 campaign platform to bring "truth to budgeting," but then blessed an accountability act that put the office within the library.

Meanwhile, in Winnipeg, delegates will be discussing resolution P-204:

The Conservative Party believes that the surest way to ensure accountability in government is to achieve the maximum possible openness and transparency in government spending. Access to information must be expanded to ensure that the public has timely access to all information about government spending. Exceptions should be few and limited to those areas where a clear case can be made for exemption (eg. certain military and security matters.

I'm assuming that the last phrase doesn't apply to Page's pre-election release of the costs to date of the war in Afghanistan, which appears to be behind much of the present foofaraw.

In any case, whether this resolution passes or not, what we have now is the very reverse of transparency. Since when did the parliamentary librarian, of all people, become a choke-point for information to which the public has every right?
Posted by Dr.Dawg at 8:53 AM