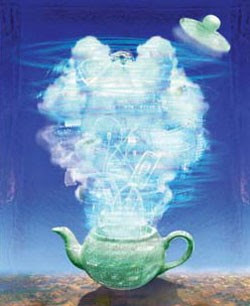 Reading the normally erudite and urbane Robert Sibley in today's Ottawa Citizen, one would think that a recent initiative at Queen's University (if it's actually taking place) represents nothing less than the end of Western civilization. Forget Islamism, terrorism, natural disasters and the current absence of sunspots: six students at Queen's, hired as "facilitators" to address prejudice in the student body, are the tipping point.

To re-cap: the idea, as reported, is that trained students would, if they overheard the use of racial slurs and what-not in public places on campus, engage the offenders in conversation in order to urge a more progressive perspective. This Herculean task--the campus presently is home to 20,000 students, more or less--has been seen by the Right as tantamount to...well, let's let Sibley speak for himself:

[I]t amounts to the imposition of Marxist and left-radical agendas to the exclusion of others. In other words, the program's real purpose is to promote the supposedly progressivist ideologies of radical feminism, gay rights, multiculturalism, and, lest we forget, anti-westernism (read: anti-Americanism and anti-capitalism).

This isn't free speech; this is indoctrination. Will students who tell a self-inflated facilitator to butt out be directed to a course of social therapy? If some poor student uses the words "Islam" and "terrorism" in the same sentence, will he be reported to the human rights commission?

I have no idea how Sibley sleeps at night. He sounds here like one of those unfortunates who searches his closet upon retiring, checks under the bed and uses a night-light. Because this, frankly, is raving, as is the hed: "Beware Of Secret Police On Campus." Good grief.

As I have noted before, the Queen's program is the very epitome of "responding to speech with more speech," a U.S. First Amendment concept much beloved by Canada's Speech Warriors™. There is no official sanction in the mix: no exercise of power or authority, other than the students' ability to engage and persuade.

But for Sibley, this will produce nothing less than "an intellectual chill" at Queen's. Which means, boiled down, that people should be able to use the n-word in the student cafeteria free of any argument. Why is it that the only speech that the Sibleys of this world seem to want to protect is hate speech?

Turning now to Carleton University, the university students' association has decided that their annual homecoming orientation charity event should no longer be Shinerama, which raises money for cystic fibrosis. The Right are out in force once again, throwing dynamite at the very notion that folks who give to charity should be able to choose which charity they support. There's plenty of moralistic spluttering and froth at Daimnation, for example, and naturally that assiduous witch-finder Jonathan Kay is on the case as well.

Let me note right off the bat that CUSA goofed on the facts. While motions (as any good procedure-freak knows) do not depend upon the Whereases, but only the Be It Resolveds, the former set the tone of the discussion, and in this case they contained the claim that cystic fibrosis is primarily a disease of white men. A minute or two Googling should have put that matter to rest, but (as I unwisely suggested at Damian's), suppose, for the sake of argument, that the facts were as stated. Would the CUSA decision then be morally wrong?

The CUSA motion, in any case, did not object to white males being beneficiaries--the objection was that (allegedly) the benefits of this charity drive would accrue almost exclusively to white males, which is a different matter entirely. For a charity event, CUSA wanted to choose instead a charity whose beneficiaries would be universal. Cancer research, for example, benefits humanity regardless of colour or gender; so do umbrella charities like the United Way.

But of course the "white males" reference struck a chord with the Right. What about breast cancer and AIDS, they thundered. Don't they hit specific populations? Of course they do: but the annual homecoming charity event has never collected for those worthy causes. If the new event were to raise funds solely for sickle-cell anemia or Tay-Sachs research, the baying chorus might well have a point. But there's never been any suggestion that the CF drive will be replaced by one of these other campaigns.

Indeed, as it turns out, CUSA has been looking at their charity drive for some time, with an eye to choosing a local cause:

CUSA president Brittany Smyth said the idea of changing next year’s orientation fundraiser to focus on a different charity, perhaps a local cause, first came up about a year ago.

She said that the part of the motion that refers to why Shinerama has been cancelled is irrelevant, not part of the official meeting record and simply reflects the rationale of the councillor who raised the motion.

But conservatives, who prize the right to make individual choices when those choices are conservative ones, see in this non-issue a perfect opportunity to advance their own contempt for freedom and inclusiveness. While there is, admittedly, some thoughtful commentary at Daimnation on this occasion, there is also the usual trollish spittle. For example, this comment is too typical of conservatives who are asked to think and reflect (note the inevitable allusion to physical violence, always the last refuge of a conservative who is losing an argument):

Dr. Dawg is an idiot provocateur and communist. That is a spin off of living in a civil society where it is a crime to slap a fool like him upside the head to get him to shut up once in awhile.

Ah, the dream of freedom. If only we could abolish the Criminal Code and let conservative thugs have their way with people who disagree with them.

Meanwhile students on university campuses will ask their questions, have their debates, find their own way in the world. And the moralizing right-wing busybodies from the outside, with their contempt for inclusiveness and their occasional taste for violence, will go on making mountains out of molehills, creating tempests in teapots, making waves in the bathtub--doing their best, in other words, to make their petty politics relevant in a world that's growing increasingly resistant to their prejudices and hatreds. Do they have any idea of just how foolish and spiteful they sound?