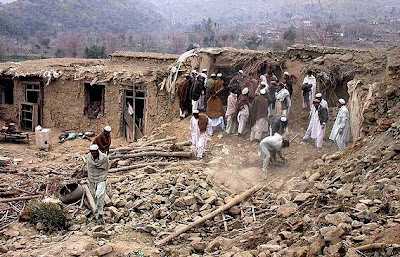 Much is being made by defenders of the Afghan mission of an opinion poll carried out in Afghanistan in December, purporting to show that most Afghans are upbeat, bullish on the future and supportive of the foreign troops in their midst. This is how it's generally being reported:

Afghans feel more optimistic about the future, according to a survey published on Nato's bloodiest day in Afghanistan for two months.

Against a backdrop of mounting violence, 70% of the population believe their country is heading in the right direction, up from 40% in 2009, according to a poll for the BBC, ABC News and the German broadcaster, ARD. Support for Afghanistan's president, Hamid Karzai, has also increased from 52% 12 months ago to 72% now, despite a lack of trust in the disputed presidential ballot last August and his problems in appointing a cabinet.

Hearts and minds, way to go!

But none of the blissful hawks who are fronting this poll express any scepticism at all about the circumstances under which it was carried out or the methodology employed, including controls against sampling bias (previous polls had significant sampling errors) or response bias.

Not surprisingly, the sceptics are already chewing:

ACSOR, which did the poll for the BBC, ABC News and the German broadcaster ARD, did not release details on the poll's margin of error.

Both Korski and Jason Burke, the Paris-based Observer correspondent who has written from and lived in Afghanistan and Pakistan, questioned the poll's credibility. They said the ability to conduct polls is difficult in the country's most dangerous and insecure regions, where the government's popularity is likely to be weakest.

And Afghans have learned over "decades" that the wisest and safest tactic when being asked a political opinion is to provide the answer the questioner wants to hear, according to Burke.

"There have been over the years a pattern of polls in Afghanistan which have been consistently and surprisingly pro-government and pro-western intervention," said Burke, author of the books Al-Qaeda: The True Story of Radical Islam and On the Road to Kandahar.

"Any polls showing extremely high approval ratings for a government that has consistently failed to provide the basic necessities for tens of millions of people is very suspect."

This is what veteran observer Antonio Giustozzi had to say about a similar poll one year ago:

[M]any people in Afghanistan don’t know what polling is. So if you do it in areas under Government control, and ask ‘do you support the Taliban?’ and there is a police station on the corner and informers on every street, what are you going to say? There is a war on - people get arrested and tortured. There will certainly be a lot of people who are reluctant to admit any sympathy for the Taliban. I think it is underestimated, although it is difficult to say how much. Also, support is not evenly spread around the country. It will be low in Kabul and the north, but much higher in the south. Other companies, which don’t publicly release their polls, but who do private polls for ISAF or embassies, use different methodologies, mixing quantitative and qualitative polling, using focus groups - they get completely different figures. Much higher for the Taliban and much lower for the Government. In ISAF polls in early 2009 support for Karzai was 4 percent. They don’t release them of course - because they show a completely different picture.”

Two years back, as much as half the country was under Taliban control. Matters are no better today. The insurgency is growing: 2009 was considered the bloodiest year for coalition forces. It is within this horrendous context that the poll was carried out.

But is it a total dud? Not necessarily.

Clearly under such circumstances prudent responses are likely to be given to direct questions about support for the government, the police and the local army. And so we might well have expected the Soviet-style numbers that the pollsters obtained in these respects.

Fully 72% of the respondents think that President Hamid Karzai is doing an excellent, or at least a good, job--and another 19% think he's doing a fair one, for a total approval rating of 91%. (Did Karzai really run a crooked election? Why bother?) His government nets an 85% approval rating. The provincial governments of the various respondents garnered 87% approval. 89% like the cops: 63% think they're doing a good to excellent job. 89% register a similarly positive view of Afghan forces, wherever they are.

But responses to less fraught questions give a more nuanced picture.

95% of the respondents called government corruption a big (76%) or moderate (19%) problem--and 44% believe that corruption has worsened.

Despite their alleged balmy optimism, 55% of them believe that Taliban strength has either remained the same or grown stronger. 43% say that civilian casualties due to US and International Security Assistance Force (ISAF) forces have gotten worse. 65%--nearly two-thirds--want a negotiated settlement with the Taliban. And 47% support the exodus of US and ISAF troops in 18 months or less.

66% oppose ISAF/US airstrikes because of the civilian toll. The Taliban and ISAF/US forces are blamed equally for on-the-ground civilian casualties.

As for the supposed infiltration of Western notions of governance, 66% support either a dictatorship or an Islamist state: only 32% favour some form of democracy.

The Usual Suspects deride mere anecdotal evidence of widespread disaffection in Afghanistan. And they have a point. For every anecdote, after all, one can find an equal and opposite one. Confirmation bias is rife in too many of these accounts, pro and con. But a highly suspect poll has no more credibility than a few on-the-spot interviews with "ordinary" people. It gives no greater insight into what people there are really feeling and thinking. The Shy Afghans, I suspect, will let us all know in good time.