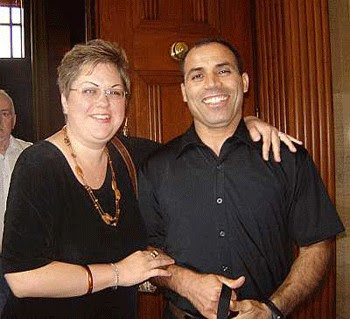 This is how Andrew Duffy of the Ottawa Citizen slants the news, presumably with the collaboration of his editor:

Mohamed Harkat, the Ottawa man accused of being an al-Qaida sleeper agent, ran a guest house in the early 1990s in Peshawar, Pakistan that was used by "mujahedeen (holy warriors) and other extremists on their way to and from training camps in Afghanistan," according to new information from CSIS.

Harkat, 41, who was known as Abu Muslim, was also an "active jihadist" in Peshawar in the service of Ibn al Khattab, who was considered a terrorist.

The information was released in a hearing in Federal Court on Monday to determine if the government was right to detain Harkat five years ago under a security certificate. The former pizza delivery man simply wants to clear his name. [emphases added]

No subtlety here. Just call an allegation "information," and print it as uncontested fact that Harkat was an "active jihadist" -- and no, the quotation marks won't save you.

The judge in the case, Simon Noël, has taken a rather more sceptical view of similar CSIS claims in the past, going to far as to use words like "prevarication." Lucky for Harkat that he's being heard by a real judge. If he'd been in front of the Ottawa Citizen editorial board instead of the Federal Court, he'd probably already be hanging from a lamppost.

UPDATE: As some commenters have noted, the Citizen has deep-sixed the story and the URL points now to another article. Luckily I snagged a screenshot of the original Duffy piece: 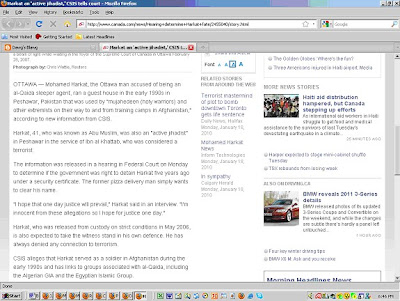 And here's an un-bylined version. This Google page indicates that the original story was written by Duffy, but the URL provided also points to the revised story by another author. Curiouser and curiouser.
Posted by Dr.Dawg at 11:50 PM

This website was... how do I say it? Relevant!! Finally I've found something that helped me. Cheers!

Feel free to surf to my web page; grupa kreatywna