Museum workers: from Civilization to War 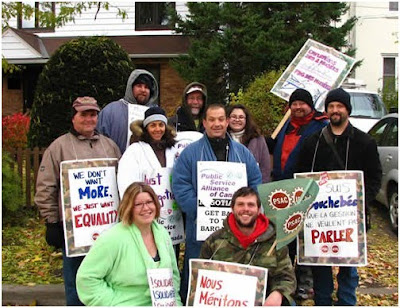 Ottawa's workers at the Canadian Museum of Civilization and the War Museum have been on strike since September 21, with a 92% strike mandate from the membership. Wages (which lag behind those of other museum workers in the region) and contracting-out are in dispute.

The union position is set out here, and it seems entirely reasonable to me: the workers want wage parity with other museum employees in the region, and improved job security.

But bargaining with the Museums is always a tough slog. Type X managers and HR autocrats rule the roost. Attempts to bargain are inevitably met with irrational levels of employer belligerence.

Intimidation is the order of the day. Speech Warriors™, take note: the Corporation is trying to censor a pro-worker Facebook page. And defaming its employees seems to come naturally to this employer.

And let us not forget the usual public misinformation campaign. A Corporation mouthpiece, Chantal Schryer, boasts that the Corporation has offered to "double" permanent positions at the two museums. She fails to mention that this will create all of 12 permanent tour guide positions--out of 55.

The CEO of the Corporation is one Victor Rabinovitch. He's a person who quailed before imagined public prejudice by cancelling an exhibition of Arab-Canadian art immediately after 9/11--for which he received a parliamentary rap on the knuckles. And he cravenly gave in when some hysterical amateur revisionist historians squawked about an exhibit at the War Museum. But he's tough and manly when it comes to facing down a handful of underpaid museum workers--it's the behaviour, quite frankly, of a bully.

Nevertheless, resolve remains high among the striking workers. When the Museum of Civilization opened a new exhibit, "Afghanistan: Hidden Treasures," the picketers outside opened an ironic exhibit of their own. And as I write this, an intrepid few have occupied Minister Lawrence Cannon's office, demanding that he ask the Corporation to start bargaining in good faith.

Political support (scroll to "the Opposition grilled...") has come the strikers' way. PSAC's sister public service union, the Professional Institute of the Public Service, has pledged its support as well. And the Canadian Labour Congress has asked the 3.2 million members of its affiliated unions to boycott both museums. Meanwhile, Rabinovitch high-handedly refused to accept nearly two thousand postcards signed by museum visitors asking for a fair settlement of the dispute.

This sample letter to Rabinovitch sets out the key issues:

As you well know, workers at the Museum of Civilization and War Museum are currently on strike.

They are demanding nothing more than the same working conditions as other federal museum workers in the National Capital Region. I am calling on you, as CEO of the Canadian Museum of Civilization Corporation, to act responsibly and return to the bargaining table to offer the workers a fair contract. Their demands for fair salaries and protections against contracting out are both just and reasonable.

Why do you refuse to agree to the same protections and wages for your employees as those that are currently in place for other federal workers doing the same work in the Ottawa/Gatineau region?

A decent, responsible employer provides a measure of protection for its employees – including efforts to avoid job losses, recognition of years of service and opportunities for career advancement. You have refused to make any such commitments.

I will not be visiting the museums until the workers get a fair contract. I will be advising my friends and family to do the same.

I call on you to act now and agree to the same protections that are in place at other major federal workplaces in the Ottawa/Gatineau region. This will help end the strike and ensure that the Canadian Museum of Civilization and Canadian War Museum will continue to be sources of national pride.

Why not send a letter or an email to Rabinovitch, copying it to your MP and to the PSAC? Here's a helpful page. Let's show these workers a little solidarity--after nearly seven weeks, and with the weather getting colder, it would be much appreciated.
Posted by Dr.Dawg at 6:45 PM