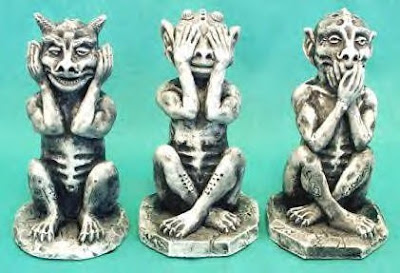 Kady O'Malley liveblogged the testimony today before the Afghanistan committee from General Rick Hillier (ret.), Lieutenant General Michel Gauthier (the one whom Richard Colvin had found "somewhat unpleasant to deal with"), and Major General David Fraser.

Hillier was up first, complaining about being called a "liar" and "incompetent," although O'Malley could not recall anyone having done so, and neither can I. He claimed that the Red Cross had had access to the detainees, but neglected to mention that the Canadian Forces were late--sometimes months late--notifying the Red Cross of prisoner transfers. He also claimed that he had never seen a memo from Richard Colvin warning him of what was happening to transferred detainees.

...Mr. Hillier told MPs that when Canada in 2007 temporarily stopped transfers of detainees to Afghan authorities, it wasn't based on Mr. Colvin's reports – which were emailed across government starting in May 2006 – but on more substantive evidence.

“We didn't base our work on reports written in May and June, 2006, which said nothing about abuse, nothing about torture, or anything else that would have caught my attention or the attention of others,” Mr. Hillier said. [emphasis added]

The bolded part of Hillier's testimony, above, is in direct contradiction to a memo from Colvin, which in fact contained several references to torture. The date is redacted, but in it Colvin says this was his "first visit" to the Sedarat prison complex, which fixes the year as 2006.* It had been sent to NDHQ and, as it happens, to the head of the Afghanistan mission task force at the time, the serviceable David Mulroney. Hillier, however, stoutly maintained that he had heard no reports of prisoner mistreatment until "late 2007."

Hillier concurred with Colvin on only one detail: Lieutenant General Gauthier was, as he put it, "a pain in the butt." As it happens, Gauthier was up next, claiming that he, too, had received no report from Colvin prior to 2007. Recall that the memo from Colvin noted above was sent to NDHQ the previous year. How could General Gauthier not have known about it?

Major General David Fraser was last. He didn't see nuthin' or hear nuthin' either. No way were any detainees innocent, he insisted, but in any case he never saw a report of any detainee mistreatment in 2005 and 2006.

Three blind generals? I have my doubts.

After the testimony and the Q and A, NDP Foreign Affairs critic Paul Dewar moved that the committee be given access to the relevant documents. The motion passed 6-0, with all of the Conservatives abstaining, after Con MP Laurie Hawn accused members from the other parties of using delaying tactics to prevent David Mulroney from testifying tomorrow.

On the face of it, this is an absurd claim, given that the documents are likely already available to the government side. In fact, a motion to hear Mulroney tomorrow was subsequently moved by Liberal MP Ujjal Dosanjh, and passed.

No doubt--you read it here first--the government will find a way to thwart the will of the committee in the meantime. In the words of the inimitable Cheryl Gallant this evening, the Liberals withheld documents from committees when they were in power.

*CORRECTION: No, it doesn't. The memo was sent in 2007: Mulroney, who is copied on it, took up his post in January of that year. According to Richard Colvin's testimony, the missing 2006 memos--suppressed by the Conservative government--also contain warnings about abuse. Those remain to be leaked.