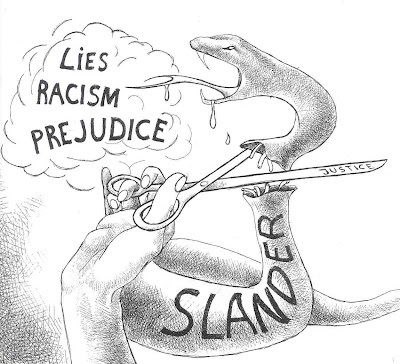 The long knives are out once again for Maher Arar. As the zone of exception known as Gitmo is about to be padlocked by the incoming President of the United States, desperate agents are bobbing, weaving and confabulating. Reading the news reports this morning is like turning over a dead rat and watching the maggots squirm.

In the blogosphere, the right side of the aisle is having a collective orgasm. As always, Small Dead Animals leads the way. Check out the combox, if you can stand the smell. And you can always count on that other foaming wingnut, our Best Canadian Blogger (at least according to a horde of US freepers), seizing yet another opportunity to defame an innocent man.

Yup, now we have the word of an FBI "interrogator" based upon a tale extracted from a 15-year-old under torture in Bagram. That'll stand up in court--not.

Never mind that nothing that anyone has said to interrogators at the Bagram air force base, where so much prisoner abuse, torture and even prisoner deaths have been documented, can be considered remotely reliable. As Michelle Shephard, Toronto Star journalist and author of Guantanamo’s Child: The Untold Story of Omar Khadr notes, some of Bagram’s interrogators were later convicted of killing an innocent Afghan citizen during an interrogation there.

And never mind that Khadr has said that he repeatedly lied to interrogators in order to improve his detention conditions, especially when interrogators kept saying that if only he cooperated, he’d be sent home.

The fact is that Maher Arar has been exonerated.

First, by an exhaustive four-year long public inquiry in Canada which concluded that Canadian agencies had no evidence of wrongdoing by Arar, and that the U.S. “very likely” based their decision to send him to torture in Syria on erroneous Canadian information.

Then, by the Harper government itself, which, before settling Arar’s law suit, sent then-public safety minister Stockwell Day to the U.S to see the American file on Arar.

Day returned to say there was nothing there that would justify keeping Arar on a watchlist, and within weeks Prime Minister Harper was on live television issuing an official, and long-overdue, public apology on behalf of the government to Arar and his family.

Not much later, Arar and his family were deservedly financially compensated for Canada’s role in what happened to him.

Quite simply, the information put forth today, coming from an agency under fire for its legacy of complicity in torture, cannot be trusted.

Maher Arar and his family have endured enough.

It is the record of the FBI, CIA, RCMP, CSIS and other security agencies that must come under scrutiny now — not Maher Arar’s.

Given Maher Arar's complete exoneration, there's enough actionable commentary on the starboard side of the blogosphere today to get him another $10 million. And he's not going to need any PayPal button should he choose to pursue that course. Too bad he can't do a class action suit in reverse.

UPDATE: And the truth, always less startling than the lies it replaces, quickly comes out:

Khadr only "stated that (Arar) looked familiar" after he was shown a photograph of then [sic] Ottawa computer engineer."

Khadr, "in time . . . stated he felt he had seen" Arar, the hearing heard.... At that time, Mr. Khadr would have been six or seven years old.

The notes also stated that Khadr "felt" he had seen Arar in Afghanistan during a period in 2001 that he is known to have been in North America.
Posted by Dr.Dawg at 8:02 AM