...and why I'm sceptical of the "EmEssEm" 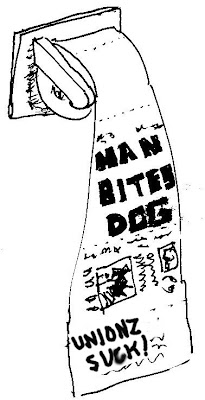 It is disheartening, to say the least, to watch my so-called union, the Public Service Alliance of Canada, fold like a cheap suit and readily agree to the federal government's offer of a 1.5-per-cent annual wage increase for the next three years (after the retroactive 2.3-per-cent hike).

Or perhaps he knows that PSAC is not really a union and has no real power in the face of an all-powerful employer.

Or maybe he's fully aware that the federal workforce provides a handy whipping boy for the government of the day both in good times and in bad.

Whatever the reason, Mr. Gordon should do the honorable thing and help dismantle this sham of a union. If nothing else, the elimination of union dues would boost our wages an additional one per cent.

And the letter that the "fair unbalanced" Ottawa Citizen refused to print:

I have little difficulty with a rank and file member of a union expressing dissatisfaction with the outcome of a negotiation with the employer (Looking Back, December 28). That's par for the course; no union can please everyone.

But I have considerable difficulty with a letters editor chipping in with a headline--"PSAC's capitulation disheartening to members"--that is unfair and non-factual, and then repeating it in a year-end retrospective.

Bargaining is a complex adversarial process that includes several factors, not the least of which is the determination of the union membership. Given the current economic downturn, there was little appetite for a strike over a percent or two in wages. Instead, the PSAC achieved a number of other improvements, in areas like classification (formerly not even negotiable), national rates of pay for the trades (marking the end of a 41-year struggle), a strengthened Workforce Adjustment Directive to help avoid layoffs, and various leave entitlements. And the resulting contracts did not contain a single rollback of existing wages and benefits.

But that isn't even the main point here. The Ottawa Citizen, like much of the media, is fond of criticizing unions for allegedly making "unreasonable" demands during the collective bargaining process. Yet, when a major union in dismal economic times makes the decision to moderate wage demands in favour of other improvements, there is the Citizen on the attack once again, this time effectively accusing the union of "capitulation."

It's not logical to try to have it both ways--unless the aim is simply union-bashing, regardless of what a union actually does. Readers might be forgiven for suspecting just such an agenda here.

Meanwhile, the bus strike in Ottawa continues: our clownish Mayor thought he'd play the tough guy, and we Ottawans are reaping the reward. My bet (one of the safer ones I've made) is that ATU 279 is about to give Hizzoner Larry O'Brien a swift kick to the nads tomorrow. Stay tuned!

And keep an eye out for the honest, unbiased "EmEssEm" coverage. It seems to have wandered off again.

UPDATE: Anti-union propagandist "applyliberally" makes me sceptical of "progressive" bloggers, too. A fact-checker would be all over this guy, but not his readers--comments are closed. I guess he didn't like what he was hearing.

Take, for example, this post (please).
Finally, while I'm on the subject, labour-supported members of the Ottawa City Council have joined their right-wing colleagues to support the Mayor's intransigent anti-union stance. Shame on them. We may have to look for more principled candidates in the next municipal election.
Posted by Dr.Dawg at 2:11 PM