"A circus of nationalists" 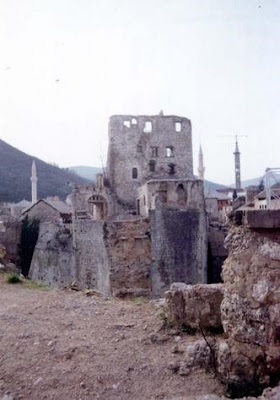 To my surprise (am I the only one?), I learned today*, fourteen years after the fact, that the constitution of Bosnia-Herzegovina, cobbled together at Dayton Air Force Base in 1995 to put an end to a three year old genocidal tribal war, prohibits Jews and Roma from running for parliament.

The truth is, it doesn't prohibit them specifically, as suggested by the blogger I linked to. But the only people permitted to sit in Bosnia-Herzegovina's parliament are Serbs, Croats and Bosniaks (Bosnian Muslims). Those even glancingly familiar with the seething ethnic nationalisms of that area of the world will understand the rush to ensure that the main players in those bloody rivalries are appropriately represented in parliament, in a fundamentally unstable balance, to be sure, but a balance that suited short-term needs.

Nevertheless, this could not hold, and it hasn't. A decision by the European Court of Human Rights may serve to jump-start stalled talks on Bosnian constitutional reform: it has made the only possible ruling in the circumstances. Excluding some citizens from running in elections because of their ethnicity is a ludicrously backward concept. If Bosnia-Herzegovina wants to enter the European Union someday, adherence to basic human rights is a sine qua non.

Could that spell the end of this ongoing "circus of nationalists" that has infected politics in the Balkans since the days of Kara-George? One would have to be foolishly optimistic to imagine that this might happen in the near future. As proof, take a look at France.

Here is a political culture that gives every appearance of being founded upon civic, rather than ethnic, national principles (to employ Michael Ignatieff's useful distinction in Blood and Belonging). And yet, in France at the moment, the government has initiated a public debate on Frenchness. There is even a minister of "national identity." When these metaphysical, essentialist notions become public policy, we can expect nothing but trouble.

Isn't there something deeply ironic about a debate about French identity led by a person of immediate Jewish and Hungarian ancestry (Nicolas Sarkozy), and driven by an immigrant from Morocco (Eric Besson)? The two men should be poster-children for the blendings and accommodations that mark the current global culture. And yet Sarkozy, likely for the crassest of political reasons, has ignited a national debate that simply reeks of ethnic nationalism, including fractious town hall meetings where such divisiveness is incubated.

The ugliness is already erupting:

When Muslim worshipers showed up at the Bilal Mosque early Sunday morning, they found two pig's ears and a poster of the French flag stapled to the door; a pig's snout dangled from the doorknob. "White power" and "Sieg heil" were spray-painted on one side, they recalled, and "France for the French" on the other.

The desecration of the main mosque in Castres, a tranquil provincial town 50 miles east of Toulouse, was an ugly exception in generally easygoing relations between the native French population and a pocket of about 10,000 Muslims, mostly Algerian immigrants and their children, who in recent years have made Castres their home, according to Muslim as well as native French residents. Mayor Pascal Bugis was quick to condemn the outrage, visiting the scene to express dismay, and police vowed a swift arrest of those responsible.

But for Abdelmalek Bouregba, head of the Castres Islamic Association, which administers the mosque, the vandalism was a troubling sign of the times. Signals are flashing everywhere that France is increasingly uneasy with its more than 5 million Muslims, he said, and the atmosphere has soured particularly since President Nicolas Sarkozy's government last month began what it calls "a great debate on national identity."

Hearings are being held to decide if women in France should be banned from wearing burkas--a wacky proposition that, raised recently here at home, gained no traction whatsoever, and is thankfully meeting opposition in France as well. And petty state oppressiveness seems to be the order of the day: a legislative initiative is presently underway to ban foreign flags at immigrant weddings in city halls.

France would have a long, long way to go before approaching Balkan-style nationalism. But it is disturbing, nonetheless, to watch a state so obviously playing with fire.

Some wise words from the editor of Respect magazine:

"The problem is that the way the question is posed, it makes people like me think that we are always going to have to prove our Frenchness."

Framing the debate as an exploration of national identity was too limiting, he added. "I have the right, with my multiple origins, to be proud of all my identities," said Mr. Cheb Sun, who was born in France to an Italian father and Egyptian mother. "We have to transmit the idea that we are all a product of this country's history, including its colonial past and the diversity and fusion of cultures it produced."

It's hard to imagine a better refutation of ethnic-based politics, and a more precise definition of civic nationalism in the 21st century.