"No dogs or Gypsies allowed" 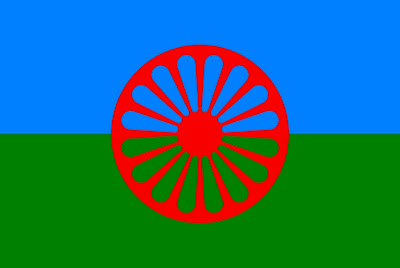 My friend and frequent sparring partner Kateland draws our attention to the latest Harper government salvo against the Roma people.

I blogged earlier on the plight of the Roma in the Czech Republic, where they face discrimination (such as restaurant signs bearing the title of this post), violence and death. Immigration Minister Jason Kenney, a man with questionable associations, slapped a visa requirement on Czech nationals to prevent Roma from fleeing to Canada.

But the Czech Republic is not the only Eastern European country where Roma face intensifying everyday persecution countenanced by the state. In Hungary, the situation has become dire, as documented by Amnesty International. Needless to say, Roma are fleeing for their lives, and would appear to meet the UN definition of "refugee":

Kenney's department has its cold and beady eye on Hungary at the moment, precisely because some Roma are arriving here. But you'd never know that, reading some of the corporate media, as Kateland points out. The Ottawa Citizen, for example, makes no mention of Roma at all:

The government hasn't yet moved to impose visa restrictions on Hungary, as it did over the summer to deal with a flood of questionable claimants from Mexico and the Czech Republic.

But the federal government also hasn't ruled out that option after the number of asylum-seekers skyrocketed during the April-to-June period, making Hungary the third-highest source of claimants after Mexico and the Czech Republic in that period.

[Kenney spokesperson Alykhan Velshi] said the Canadian government, which has provoked anger and threats of retaliation by Prague and the EU as a result of the Czech visa decision, is looking for alternatives in the case of Hungary.

"We're working with (senior government officials) to see if there are others ways to resolve this issue -- whether crackdowns on organized crime networks encouraging unfounded asylum claims, or addressing the issue of unregistered immigration consultants misleading people into coming to Canada and making asylum claims."

So who, asks Kateland, are these Hungarians?

It turns out that the Citizen story omitted a salient fact, akin to reporting a family fleeing from a house while failing to note that the house was on fire. The Hungarians in question are Roma:

Andras Pap, who has written on inadequate Hungarian hate crime laws at the Central European University, expressed sympathy with Canada's concern about the credibility of the claims.

"Under current international law standards Hungarian Roma should not qualify as political refugees, even though Hungary should be much more stringent in providing protection to its minorities," he said in an e-mail Wednesday. "Such claims can legitimately be dismissed by Canadian authorities." But he said the re-imposition of a visa requirement would be both "unfriendly" and would do nothing to get Budapest to meet its domestic and international legal obligations to protect the Roma from discrimination and far-right violence, which is on the upswing.

International law is indeed clear on the matter. There is documented persecution of Roma in Hungary, with the state turning a blind eye. The International Declaration of Human Rights is plain:

Article 8.
· Everyone has the right to an effective remedy by the competent national tribunals for acts violating the fundamental rights granted him by the constitution or by law.

The Declaration does not merely enjoin states from violating human rights, but places upon them the obligation to ensure that rights are not violated within its jurisdiction. For example, with respect to the right to food, General Comment 12, adopted by the UN Commission on Human Rights in 1999,

provided a typology for monitoring the different levels of state obligations under the ICESCR. The typology -- to respect, to protect and to fulfil -- is now generally applied to all economic, social and cultural rights. The obligation to respect refers to the state’s commitment not to undermine enjoyment of human rights either through action or failure to act; the obligation to protect requires the state to ensure that persons living within its jurisdiction do not suffer human rights violations at the hands of non-state actors; the obligation to fulfil requires the state to provide an institutional framework to ensure that rights can be effectively enjoyed in practice (to facilitate, and in cases of natural disaster or emergency to provide). [emphasis added]

Pap seems to be employing a bit of weasel-wording in his commentary, above. No doubt the Roma, chased out of their country by far-right thugs under the benign gaze of the Hungarian state, do not qualify as "political" refugees. But that was never the issue. They aren't being persecuted because of their politics, but because of their ethnicity.

Unfortunately, their ethnicity is what matters here as well. Once again the Harper government is behaving just as an earlier Canadian government did with Jews anxiously seeking asylum from the Holocaust: slamming the door in their desperate faces.
Posted by Dr.Dawg at 1:52 PM