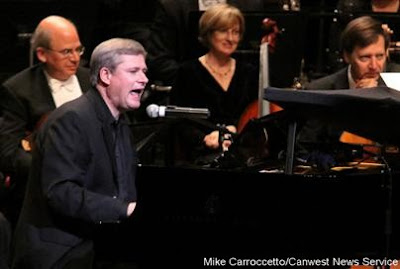 There is one art,
no more, no less:
to do all things
with artlessness.
--Piet Hein

What was Stephen Harper setting out to do when he performed with Yo-Yo Ma at the National Arts Centre last night?

It is a considerable way to row back from [Stephen Harper's] comments of last year, when he said "a bunch of people at a rich gala" didn't resonate with ordinary people (this was in response to a number of Quebec TV stars, who had protested about government funding cuts to the arts at a glitzy black tie ball). But the lack of artifice and blatant political spin is likely to be greeted with acclaim by "ordinary people". This is not a man who puts himself "out there" and it must have taken considerable guts to have stepped onto a stage with one of the greatest musicians of our time.

Mr. Ignatieff and his advisors must have watched the coverage, head in hands, through gaps in their fingers, and wondered what else can possibly go wrong for them.

Ivison couldn't be more mistaken. Harper has taken his mentor Tom Flanagan's advice: "A good political leader is like an outstanding athlete or entertainer" ( Harper’s Team, p. 5). But Harper is not an outstanding entertainer. This stuff rings patently false, like the "man and kitten" image, blue sweater-vest and all (note the expression on his face), or his no doubt unintentional parody of Trudeau's gunslinger look (and again).

The last thing we expect of political leaders these days, of course, is spontaneity: there is seldom an unscripted move, a breath taken that has not been pre-approved, an untested gesture, a chance remark. Images go to war with other images in the world of hyperreality: even the self-consciously "real" is nothing of the kind.

Pierre Trudeau's famous pirouette behind the back of Queen Elizabeth had, as it turns out, been rehearsed. So what? "The picture expresses his maverick anti-conformism, his democratic disdain for aristocratic pomp,” said photographer Doug Ball. Not precisely, but close enough. Trudeau, the "reason over passion" politician, exploited passion at every opportunity, creating a set of political images--a frame--that resonated deeply within the electorate.

Jeffrey MacLeod and Nick Webb provide a short course on political framing and image-making here. Citing a favourite authority of mine, George Lakoff, the two political scientists note that "voters do not base their decision on issues or interests. Rather, they vote based on values that attach to frames already established." And they go on to make an essential point:

Lakoff declares his bias in support of the Progressive frame. He argues persuasively that you cannot win against the Conservative frame by evoking its terms. Progressives are hampered by old Enlightenment assumptions that simply presenting "facts" related to our interests will persuade Conservatives to the cause. Unframed facts simply bounce off the hostile frame and do more to reinforce it than change it. We also must consider that frames are supported by reason and passion (i.e. feeling) The strengthening of a frame is accomplished through narrative, imaging, and changing the terms of the debate to support the alternative frame.

But what we're seeing now, from Michael Ignatieff lost in the woods to the fifth Beatle, is something profoundly interesting: the attempted destruction of political frames.

Briefly on Ignatieff: he has tried frame-building (True Patriot Love), but he just can't pull it off. Nobody knows him to this day. There is no coherent set of images to which he is attached, no resonating sense of values, and as he blunders about, the confusion in the public mind grows ever deeper. Unity in place of division is his message, but in his hands that's just a concept. I hate quoting this guy, but he's simply nailed it on this occasion, and so, in a single sentence that he quotes, did Rex Murphy: "Mr. Trudeau's braininess was sexy, Mr. Ignatieff's you merely gather from the résumé."

But Harper, too, is in the wrong hands. He is who and what he is because his frame is conservative: his base hungers for his continual re-expression of their values, and his public self is constructed as such by the frame. Yet from time to time he batters his head against it, and he did once again last night.

I know I have conservative readers, so I invite you to comment. Were you impressed by this? Did it resonate with you? Or did it look and feel soft and centrist, the antics of a person desperate to prove that he can be all things to all people, appearing and performing at the very sort of function that he once publicly held in contempt?

Was there passion there, or a grim attempt at it? Did he change a single vote at this gathering of the despised elites? Did he fool anyone? What do you think he was trying to achieve? What did he achieve?

Ivison's observed "lack of artifice" on Harper's part was the very opposite. It was yet another contrived attempt to extend his voter appeal. But there was no red meat here for his base as he pandered so obviously to effete gala attendees, and almost certainly no rush to embrace him by the latter, even if they doubtless enjoyed his little surprise. It was, after all, good fun--but hardly a "political masterstroke," as Ivison would have it.

On the contrary, while such moves may have have their immediate appeal, it's hard to see what political advantage can be gleaned from them. If bouncing facts ineffectually off political frames reflects outdated Enlightenment thinking, surely it is even more counter-productive to erode them from within.

Far from creating an image conveying the values for which conservatives hunger, and at the same time somehow appealing to those outside the fold, Harper's debut on the grand stage can only have induced a kind of queasiness across the political spectrum. Now that the moment is past and the laughter and applause have died away, I suspect that a good many of us, whatever our public allegiances, are feeling more creeped out than appreciative.