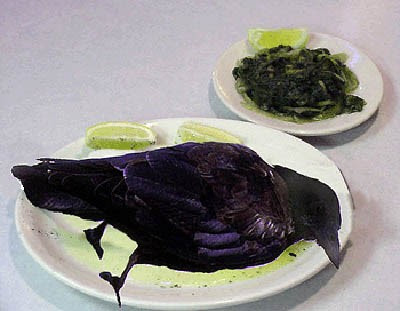 Looks like I was wrong--really, really wrong. Stephen Harper wowed the spectrum last night, and it's all over the 'sphere by now.

It was classic over-analysis on my part. I took the long way to cross the street from east to west. I headed east, talking to myself in a grumbling kind of way the whole time. My commenters, even the friendly ones, are sounding a little wary at the moment. Bad sign.

My buddies on the Left aren't unanimous, but there's a majority, I think, giving Stephen Harper his due. And the conservatives, a hard bunch to please when it comes to galas in the fleshpots of Ottawa, are handing the man full marks. I can't help observing, though, in the second link above, that there's a sense of relief along with the pride. "He really is one of us," says one commenter. No more "cold fish," says another.

A few on my side of the fence did see things more or less my way, minus all the theory. Some Liberal partisans were cutting, as usual, but they came off kind of petty; others were not and did not. Michael Ignatieff, in my opinion, lowered himself with this:

Ignatieff also mocked the prime minister's appearance at the National Arts Centre Gala in Ottawa Saturday, where he treated the audience to a rendition of The Beatles': 'With A Little Help From My Friends.'

"He's been out of tune for four years," Ignatieff quipped.

Nothing wrong with good snark, but that was just too easy: a cheap shot.

So I'm trying to figure out how I got this so munged.

I'll defend the political framing argument in general, but it was misplaced in this instance. Harper's debut didn't weaken the conservative frame in the least. In fact, judging from all the Internet chatter, it may have strengthened it by humanizing it. In the meantime, we can pelt that frame ineffectually with facts--quoting his comments last year about galas, for instance, or reminding people of his spending cuts in the arts--but as my quotation from Jeffrey MacLeod and Nick Webb in my last post indicates, that sort of thing just reinforces a frame.

There was no lack of artifice in the event--what we saw was carefully scripted--but that doesn't matter, as I pointed out in that post. Imaging and narrative matter. The engagement of members of the public in developing the frame is crucial. Do they see themselves in the narrative? Is it a continuing story in which they are not only caught up, but get to add their own threads?

Clearly, at least judging from the commentary I've read, Harper's performance did resonate. Far from being "creeped out," most observers put themselves in his place, imagining that he had made deliberately made himself vulnerable at the same time as he was having a bit of fun. The event was convivial and entertaining, and startling at the same time, because "convivial" and "entertaining" are not normally adjectives that one would apply to the man.

There's no point reiterating that the man is a politician, and hence a performer anyway, one who takes much greater risks in that role than merely singing a Beatles song. Or pointing out that this was almost certainly rehearsed, reducing any risk considerably. Or that, unlike the image of Stanfield's fumbled football--a photo taken by the same photojournalist who captured Trudeau's pirouette--no career-ending graphic image arises from a false note or two.

Those are just more unframed facts. But this was all about storytelling. The surprising twist last night makes the Harper story that much more compelling. His chief antagonist is hobbled by a charmless professorial aloofness, a depressing counterweight to Harper's robotic coldness. But the latter, at least to some small degree, has been dispelled. The former, not so much.

Nobody was fooled in the least by Harper's awkward sweater-vest and kitten moments last year, which were so evidently fake that they worked against him. But the NAC debut was a different thing entirely. It was Harper with a human face, and I didn't see it. My prediction was wildly off-base, my assessment faulty, my analysis plain wrong. The people have spoken. Mea culpa.

This bird is some tough. Can anyone recommend a good wine?