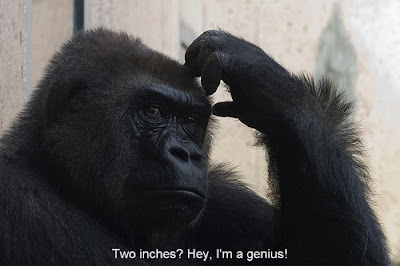 Biological racism was pioneered by Arthur de Gobineau in the mid-nineteenth century, honed by Francis Galton, Darwin's cousin, and transformed into state policy by the Nazis. It's been carried on since by racial theorists like the fraudster Cyril Burt and his disciples Arthur Jensen and Hans Eysenck, and of course Richard Herrnstein and Charles Murray, whose Bell Curve was an attempt to justify discrimination against Blacks. It's a fairly prominent conservative fringe phenomenon (Phillippe Rushton, Steve Sailer, Richard Lynn, Kevin McDonald, and our Kathy Shaidle), a cultish, Volkische pseudo-science deployed to explain and defend white privilege.

But the genetic Truther virus is now oozing alarmingly into the liberal mainstream. The latest carrier is none other than William Saletan, the chief national correspondent of Slate Magazine, who is promoting the "Negroes-are-stupid" line in a three-part article.

I would like to explore both the tone and the substance of this devious piece of racialist propaganda: but first, a general observation. These days, when people come out with this sort of stuff, or even ranker nonsense, all they have to do to escape the charge of racism, it seems, is to deny it. So long as they don't wear a white sheet or use the n-word, they're home free. It's a double-tongued strategy, employed in tandem with the deliberate use of the word "racist" to describe affirmative action programs and other measures to overcome the effects of historical racializing. ("Race" is a social construct: the Irish were once considered a "race," for example: skulls were collected and measured, and their alleged "inferiority" supposedly scientifically established. Imposing that spurious and mutable notion on an entire group of people is to racialize that group.) Never mind. Saletan is a racist, pure and simple, no ifs ands or buts.

Racism is, and has always been, an instrument of political policy used to justify the subjugation, exploitation, oppression and even wholesale slaughter of entire groups of people. As US domination of the world through economics and endless warfare continues apace, there is no shortage of racial ideologists to reinforce its mission--the useful idiots of hegemony, always helpful to have around when brown people are dying. Saletan is just doing his bit. Observe. This is how a liberal does racism.

Saletan begins with the senile James Watson, and his recent comments about Blacks. He outlines some of the fallout, and then begins his more-in-sorrow-than-in-anger refutation of Watson's critics. "Tests," he says, "show an IQ deficit" of Blacks relative to whites, and (using the common "I can't be a racist" alibi frequently peddled by the likes of Phillippe Rushton) whites relative to Asians.

Well, whose tests? What do they measure? Could these be the same tests that led Richard Lynn to claim that the San (Bushmen) have an average IQ of 54? (How long would a group of individuals of that putative level of intelligence last in the Kalahari Desert?) Well, Saletan's just gathering speed.

Gosh, he says, if the thought that Blacks are genetically inferior to whites is bothering you, think of the poor Christians confronting evolution! With that neat rhetorical flourish, putting anti-racists in the same camp as snake-handlers and faith-healers, Saletan continues to flog his IQ-test nonsense, pointing out that Blacks get a mean score of 85, while whites score 100 and "Jewish Americans" 113, along with Asians. He mentions other groups, too, but I quote his reference to Jews because it indicates the degree to which racial categorization has suffused his thinking. Echoes of Nuremberg, anyone?

Then we get to the nub: head size:

I wonder how Saletan and his merry gang of genetic racists explain this sort of thing away. Yup--you can lead a normal life with very little brain indeed. You can do well in school. You can probably even write articles for Slate. I have challenged these people before with such findings, but the answer is always an embarrassed evasion. Rushton runs around with string measuring people's heads, and Saletan tells us that size does matter.

"I know, it sounds crazy," he concedes. Well, uh, yes it does, now that you mention it. Head size. Mmhmm. Why not penis size? Oh, wait, that's been covered. (Our friend the gorilla, incidentally, has an average penis length of 2".)

But back to IQ. If it's all socio-cultural, he says, "[y]ou also have to explain why on IQ tests, white kids of parents with low incomes ­and low IQs outscore black kids of parents with high incomes and high IQs." Hold on a sec. Even Blacks with high IQs give birth to Blacks with low IQs? And low-IQ whites give birth to kids with high IQs? Now, how does a genetics-based theory of intelligence explain all that, exactly?

Then we get to the hand-wringing, because, like every good liberal, Saletan feels must express personal anguish as he imparts the bad news:

Why write about this topic? Why hurt people's feelings? Why gratify bigots?

Is that the odour of sanctimony that's making me rush to open the windows? Saletan goes on to say that there needn't be any social consequences, none at all, if we just accept the bitter pill of racial differences in intelligence. The Aryans won't be happy, he says, because Jews and Asians are smarter than us Caucasoids. We can't easily impose averages on individuals. Intermarriage can eliminate differences in the long run (as though the bioracialist creed wouldn't have an effect on that). The environment has some role to play. Anyway, intelligence isn't a measure of human worth, after all. And just to reinforce his liberal bona fides, Saletan scatters breadcrumbs throughout his piece--damning comments about explicit genetic racists. Hey, he's not like those guys.* He wants to help these poor genetically-disadvantaged people.

It's Saletan's open-mouthed faux-innocence that's the most galling thing about the article. He uncritically starts from the notion of DNA-based "race," even though this hasn't merely been debunked but nuked, most notably by Stanford University professor emeritus and population geneticist Luigi Cavalli-Sforza. He takes the objectivity of IQ tests and the existence of the "g factor," a mysterious measure of general intelligence, as givens. His own racial superiority, of course, would only be used for good. One almost longs, after reading this rubbish, for the straight talk of a Phillippe Rushton or a J.B. Stoner. At least they fully accepted the social consequences of their ideology, without apology or prevarication.

UPDATE: (November 26). Racial scientists and the company they keep. H/t JahSun in the comments.
______________
*"One of the strangest passages in IQ scholarship is a recent attempt by hereditarians to minimize their own mediated-learning study because, while it 'did raise the IQ of the African students from 83 to 97, this is still low for students at a leading university.' You've got to be kidding. Screw the other universities. Going from 83 to 97 is a screaming success."