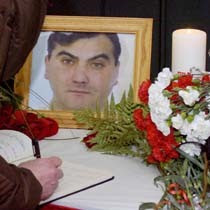 There are to be four separate investigations of the Dziekanski homicide.

1) An internal RCMP investigation. Yeah, right. I don't have the heart to laugh out loud.

2) A coroner's inquest. As we saw from the "incredible rubber Mountie" Ian Bush inquest, the terms of reference are so narrow that the jury is not permitted to assign blame.

3) Vancouver Airport Authority. May uncover good stuff about the incompetence of the airport personnel, who told Dziekanski's mother, after three anxious inquiries, that her son was nowhere to be found, but the RCMP is not under their jurisdiction.

4) The Commission for Public Complaints Against the RCMP. They can say what they like, but they will be ignored, as usual.

The ever-sensitive, intelligent* Stock Day has ruled out a public inquiry. Why on earth would we need that?

Here is the likely outcome. Picture yourself, having watched the video, metaphorically being told what's what in Harper's Ministry of Love:

A cassette had appeared between Day's fingers, and he inserted it into a VCR. For perhaps five seconds the screen was within the angle of Winston's vision. It was a video, and there was no question of its identity. It was the video. It was another copy of the video of four RCMP officers killing Robert Dziekanski at the Vancouver Airport, which he had chanced upon months ago ago and promptly destroyed. For only an instant it was before his eyes, then it was out of sight again. But he had seen it, unquestionably he had seen it! He made a desperate, agonizing effort to wrench the top half of his body free. It was impossible to move so much as a centimetre in any direction. For the moment he had even forgotten the dial. All he wanted was to hold the cassette in his fingers again, or at least to see it.

He stepped across the room. There was a memory hole in the opposite wall. Day lifted the grating. Unseen, the frail plastic box was whirling away on the current of warm air; it was vanishing in a flash of flame. Day turned away from the wall.

'Ashes,' he said. 'Not even identifiable ashes. Dust. It does not exist. It never existed.'

Winston's heart sank. That was doublethink. He had a feeling of deadly helplessness. If he could have been certain that Day was lying, it would not have seemed to matter. But it was perfectly possible that Day had really forgotten the video. And if so, then already he would have forgotten his denial of remembering it, and forgotten the act of forgetting. How could one be sure that it was simple trickery? Perhaps that lunatic dislocation in the mind could really happen: that was the thought that defeated him.

Day was looking down at him speculatively. More than ever he had the air of a teacher taking pains with a wayward but promising child.

'There is a New Government slogan dealing with the control of the past,' he said. 'Repeat it, if you please.'

'"Who controls the present controls the past,"' said Day, nodding his head with slow approval. 'Is it your opinion, Winston, that the past has real existence?'

Again the feeling of helplessness descended upon Winston. His eyes flitted towards the dial. He not only did not know whether 'yes' or 'no' was the answer that would save him from pain; he did not even know which answer he believed to be the true one.

Day smiled faintly. 'You are no metaphysician, Winston,' he said. 'Until this moment you had never considered what is meant by existence. I will put it more precisely. Does the past exist concretely, in space? Is there somewhere or other a place, a world of solid objects, where the past is still happening?'

'Then where does the past exist, if at all?'

'In records. It is written down.'

'In the mind. In human memories.'

'But how can you stop people remembering things?' cried Winston again momentarily forgetting the dial. 'It is involuntary. It is outside oneself. How can you control memory? You have not controlled mine!'

Day's manner grew stern again. He laid his hand on the dial.

'On the contrary,' he said, 'you have not controlled it. That is what has brought you here. You are here because you have failed in humility, in self-discipline. You would not make the act of submission which is the price of sanity. You preferred to be a lunatic, a minority of one. Only the disciplined mind can see reality, Winston. You believe that reality is something objective, external, existing in its own right. You also believe that the nature of reality is self-evident. When you delude yourself into thinking that you see something, you assume that everyone else sees the same thing as you. But I tell you, Winston, that reality is not external. Reality exists in the human mind, and nowhere else. Not in the individual mind, which can make mistakes, and in any case soon perishes: only in the mind of Canada's New Government, which is pro-individual, pro law and order, and, thanks to Stéphane Dion, immortal. Whatever the New Gov--well, how does "North Star" sound?--holds to be the truth, is truth. It is impossible to see reality except by looking through the eyes of the North Star. That is the fact that you have got to relearn, Winston. It needs an act of self-destruction, an effort of the will. You must humble yourself before you can become sane.' [with apologies to George Orwell.]

Be prepared to be shocked sane, folks. The fix is in.

Now there will be a fifth investigation: the BC Attorney-General has launched a "full public inquiry" into the death--an "open and integrative review," including a review of the use of Tasers in the province. While the terms of reference have still to be established, the inquiry will be

- reviewing policies surrounding the use of Tasers and recommending any necessary changes;

- reviewing the incident involving Dziekanski, including the actions of the RCMP, Canada Border Services Agency and immigration processes and Vancouver airport;

- recommending how the handling of foreign passengers coming to B.C. through Vancouver airport can be improved.

BC has stepped in where the federal government, in a shocking abdication of responsibility, has refused to tread. The bumbling Stockwell Day is more interested, it seems, in drunk drivers than justice.* An open, transparent and comprehensive BC inquiry might allow the BC Solicitor-General to lay criminal charges, if appropriate, and encourage the government to ban Taser use in the province. But, given that the RCMP is under federal jurisdiction, a federal public inquiry would have been far more appropriate in the circumstances, allowing a fuller investigation of the internal operations of the force.

Meanwhile, BC Premier Gordon Campbell has had the grace and good sense to apologize for the killing. A Polish-speaking airport worker, on the job at the time, has been dismissed by the Vancouver Airport Authority, possibly for speaking out. And could one of the four officers, trained in the use of a defibrillator, have used one of several available in the airport to save Robert Dziekanski?