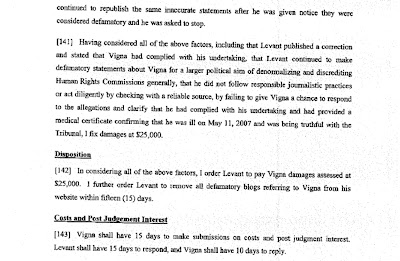 The mighty Ezra has struck out.

Defamation--as others of Levant's politics are on the way to learning--is not a matter of free speech. He'll be shelling out $25,000, and costs, to Canadian Human Rights Commission officer Giacomo Vigna for repeated defamation.

Big City Lib scooped me on this. Go read.

And here's the whole decision for your additional reading pleasure.
Posted by Dr.Dawg at 8:37 PM

Well, Vigna was hardly a super duper whooper secret human rights agent hiding in his undisclosed secret headquarters...Probably would have been a good idea to give him a call. Often is.

This is a very interesting decision. It explores the actual workings of a number of the defamation defences and provides something of a road map as to the evidentiary requirements. I suspect Stacey and his helpers will be much in demand as witnesses in various pending matters. Have to nail that Jadewarr identity thing down.

Lots more there - likely a bad idea to call a lawyer in the role of a lawyer rather than a complainant "a fibber". But that was true going in. Nothing new there.

In a long career I suspect Ez will have to pay out on more than a few of these sorts of suits - sort of the nature of the beast.

But, by all means enjoy, Dawg. I know I would if the outcome had been different.

Kinda had a feeling it was going to go down this way.

The judge deserves kudos for seeing through some of the stuff Vigna tried to throw.

My impression, sitting in the room for several days of the trial, was that he was a no-nonsense kind of person. That was both good and bad for Ezra. Maybe more bad than good -- but that's all I can say.

I hope Vigna follows up with a claim for full costs (solicitor and own client). Levant's conduct is sufficiently egregious to warrant that. Only when E.L. is forced to pick up the full lawyer's bill for the victims he besets will that slimy jackass be motivated to give it up.

Jay, I can't see how you conclude that the decision "explores the actual workings of a number of the defamation defences and provides something of a road map as to the evidentiary requirements." It's a solid effort, but hardly a comprehensive survey of the law. But given that its a judgment given under the simplified procedure, it's more than adequate to the task.

BTW I note that Vigna was acting on his own behalf. If you're Chris Ashby, that's got to sting a little. Not to mention if you're one of Ezra's many co-defendants in other proceedings.

Anyone who sends this guy another nickel needs their head examined. It seems to to me that the lesson here is that Ezra didn't intend to defame Vigna per se. He used Vigna as a means to try to "denormalise" the HRC. He was "reckless" in doing so. In other words, defamation and freespeechyism are separate matters - a point many of us have been trying to make to these guys for a long time.

Another great victory for the censors and their never-ending crusade to suppress freedom of expression. This disgusting decision by Judge R. Smith proves yet again (as if further proof was needed) that freedom of expression in the People’s Republic of Canada is as dead as a doornail. This case would have been laughed out of court in a country with true freedom of expression (like the United States). Basically, in Canada you are allowed to express yourself—as long as you don’t offend or otherwise hurt the delicate feelings of litigious censors of the Vigna, Warman and Kinsella varieties.

I find it utterly laughable that anyone could lower the already low reputation of so strange an individual as Giacomo “Serenity Now” Vigna. If Vigna is a national and international laughingstock, it is entirely the result of his bizarre behaviour at the Lemire “human rights” show trial, and not because of any comments made by Ezra Levant (whose major crime was to publicly point them out and ridicule Vigna). Vigna may not be so serene once the Supreme Court of Canada gets around to ruling on this travesty of a decision (probably ten years from now). In the meantime, Giacomo, repeat after me: Serenity now! Serenity now!

Revel in your schadenfreude, Baglow—another one of your political enemies has been duly punished for having the temerity to express himself freely.

I just love sore losers. I can imagine Heinz hopping up and down and then holding his breath until he turns blue. :)

"schadenfreude" is capitalized, by the way.

That is so precious! Poor sad Heinz, lies are not free speech, they are lies. Does the champion of free speech thus defend Exra when he sues others, is that seen through a different lens or is Exra both victim and villain?

All of the above.

“Schadenfreude” is always capitalized in Germany, you pedantic twerp, but not always or even usually outside of that country. Either spelling is acceptable. Learn how to use Google or maybe even consult a few dictionaries before you lecture people about this type of thing.

The above replies are all typically lame. If you don’t have the brains to address the substance of the a person’s argument or position, I guess all you can do is disparage the person.

Are you so clueless as to put Levant, Canada’s foremost defender of free expression, in the same category as litigious, censorial, lawfare specialists as Vigna, Warman and Kinsella?

It explores the actual workings of a number of the defamation defences and provides something of a road map as to the evidentiary requirements.

No, what it does is confirm that if you accuse someone of lying to a court, especially for a tangenital purpose, you have libelled them. It's an affirmation of law that has been around for hundreds of years.

Sometimes a cigar is just a cigar.

Heinzy,
The reason nobody addressed the substance of your argument is that there's no substance there.
You assume that Vigna had "low reputation" prior to Levant's decision to make him a punching bag, yet I'm quite certain that you, like most people, had never heard of the man before Ezra went on his reputational jihad.

You assume that an American court would give Levant a pass for calling a fellow lawyer, a liar, but you obviously know nothing about American libel law; accusing a lawyer of lying to a court is defamatory and actionable in both countries.

You assume this is getting anywhere near the Supreme Court of Canada, which is the funniest assumption of all. Nobody, not even Jay Currie (who, unlike you, still remembers a little law) had identified a single ground of appeal.

Face it, Heinzy, you're just a sweaty Levant fanboy, and you can't accept that your porky hero has been blowing smoke all this time about the various "nuisance suits" that he faced, just as he blew smoke about human rights law in his poorly written, badly researched book.

Please, send Ezra all your money if you like. But don't try to persuade reasonable people that your ranting and whiing is "substance".

Well, yes, actually. Ask Merle Terlesky. Or, for that matter, me--another victim of Ezra's lawfare, although he backed off eventually.

Apparently IOKIYAC, but defending the litigious Ezra Levant against those with a rightful judicial claim in front of what he has been pleased to call a "real court" puts you in a bit of a moral bind. Just saying.

Your hero worship doesn't qualify as exoneration and Exra's slapp suit is no more noble than any other. Now go wipe your chin. Exra doesn't protect free speech so much as he attempts to bully and legitimize his bigotry. Kinsella is a squalling douche bag and so is Exra. Two nasty peas in an ugly little pod.