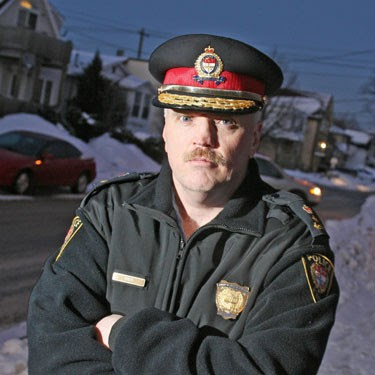 What does this tell us? Far from firing this thug, or at the very least suspending him without pay until the conclusion of his two-years-late "internal investigation," Chief White will retain him on the force at full salary.* And the other officers involved in the gang assault on the 100-pound Stacy Bonds are still out there "dealing with the public."

Not a good start, Chief.

By what he assures us is a coincidence, White has just announced measures to deal with racial profiling by his troops. The initiative was actually begun by order of the Ontario Human Rights Commission, after a well-publicized case of racist antics by the Ottawa police--six years ago. (The police cleared themselves of any blame in this incident after one of those "internal investigations." The OHRC disagreed.)

Meanwhile we await the results of another human rights hearing after another "internal investigation" cleared another cop--five years ago. What saved young Chad Aiken's version of events was an audio recording of his encounter.

The vicious police assault on Stacy Bonds took place a mere two years ago. We'll see if it leads to the same mutual back-scratching result as all those others. So far, the signs are not reassuring.

A recent Toronto Star report looked at 3,400 investigations of police misconduct in Ontario over a 20-year period. In only 95 of those cases were criminal charges laid and only 16 officers were ever convicted. Only three of those went to jail.

Will Bonds beat the odds?

_________________
*As a reader rightly points out, Section 89 of the Ontario Police Services Act does not permit suspension without pay--even in a case of murder. But Desjourdy could at least be sent home to cool his heels, if outright firing is indeed not an option even in so egregious a case. And what of his co-animals?

don't you think that we should wait for the investigation to conclude before we lynch  this man? i would like to see video of the arrest. and what she did to provoke this kind of response from the police.as usual there are two sides of the story,sadly we won't hear his.

You're way behind. A judge has seen the video, and reported on that in his judgement. She did nothing whatever to provoke the response--or so a mere judge said after viewing the evidence.

All we have going now is one of those dubious, self-serving "internal investigations." The heavy lifting has already been done by the judicial system.

david, are you an apologist for police violence?

Or are you emotionally complicit with the sadistic, racist and gynophobic police uniform-wearing piece of garbage who gets his jollies from torturing small women?

a mere judge..the judge in that case where the two little girls were drowned said he wished he could overturn the jurys decision,so as no one here has seen the video it is only his opinion in short i want a full investigation.and i am not an apologist for violence of any kind,weather it is the police or the ''black bloc''.

What I'm trying to get through your head is that the rea;l investigation--a full judicial process--has already taken place. Both defence and Crown have seen the video as well.

White's "internal investigation" adds nothing to the record.

david, are you an apologist for police violence?

Or are you emotionally complicit with the sadistic, racist and gynophobic police uniform-wearing piece of garbage who gets his jollies from torturing small women?

thank you for your patience Dr.dawg

I would have thought an old union man like you would have supported the idea that a cop shouldn't be fired without a formal disciplinary hearing or possibly a criminal finding of culpability, which this couldn't possibly be because the cops weren't on trial. A finding of fact in a trial of one person is most definitely not a finding of legal guilt of a thrid party. You may be on the side of the angels here, but that doesn't mean you get to nuke the rule of law.

At the very least, the goon in question should have been suspended without pay--and his co-animals as well.

Peter, it's trite labour law that, under egregiously extreme circumstances, an employer may sever relations with an employee, for cause, without a hearing. Those egregious circumstances in the instant case have been made out to a T.

The video evidence is stark. Not only should the thuggish Desjourdy have been suspended without pay at the very least--so should his co-animals have been sent packing.

Dr. Dawg, This is my reply to your comment below:

FROM THE ONTARIO POLICE SERVICES ACT:

66. (1) The chief of police shall cause every complaint referred to him or her by the Independent Police Review Director under clause 61 (5) (a) to be investigated and the investigation to be reported on in a written report. 2007, c. 5, s. 10.

(2) If at the conclusion of the investigation and on review of the written report submitted to him or her the chief of police is of the opinion that the complaint is unsubstantiated, the chief of police shall take no action in response to the complaint and shall notify the complainant, the police officer who is the subject of the complaint and the Independent Police Review Director, in writing, together with a copy of the written report, of the decision and of the complainant’s right under subsection 71 (1) to ask the Independent Police Review Director to review the decision within 30 days of receiving the notice. 2007, c. 5, s. 10.

Hearing to be held

(3) Subject to subsection (4), if at the conclusion of the investigation and on review of the written report submitted to him or her the chief of police believes on reasonable grounds that the police officer’s conduct constitutes misconduct as defined in section 80 or unsatisfactory work performance, he or she shall hold a hearing into the matter. 2007, c. 5, s. 10."

"If an individual is however employed pursuant to a public statute and is entitled to a hearing by such statute, the deprivation of a hearing may give rise to an application nullifying the termination and hence ordering reinstatement. A good example of this are the court decisions dealing with firefighters who were not given the required hearing at the municipal council before termination."

From the linked article:

Prosecutors would likely feel pressure to oppose an application to stay proceedings because of an abuse of process by police, Paciocco said, because “it’s going to impugn the integrity of the police officers.”

(I know that is one line near the bottom, but, really, does anyone remember the name Dreyfus anymore? More is done to impugn the justice system and integrity of the police force by not moving against the "bad apples" then there is when these events eventually surface.)

WOW never seen a one sided article than this.

Please have an open mind, the reason they do "suspension with pay" is the fact the person in question is innocent until proven guilty. Now before you all jump at me, it applies to everyone, for example, Kevin Gregson (The RCMP officer who murdered the Ottawa Officer) is considered "accused" and he is technically innocent until proven otherwise. That is more on the extreme side and you may argue that he is locked up. Fine someone who sexually assaults someone, they are most likely released on a promise to appear and they are free to roam the streets.

In all honesty, who cares if she was 100lbs or 300lbs, and let's drop the race card because that is just pulling teeth.

Here is reality, worse things have occurred in our country and even worse things have occurred in other countries. You must stop living in his bubble gum fantasy world where you think these things do not exist. I understand you are frustrated but you must accept it, I am not saying it is right but I understand that this does occur in real life. What can I do as an individual, what can everyone do as a group, the answer is the same.... nothing. I am sorry that is not the answer you wanted to hear but it is the truth. Sometimes the good get it worse, but sometimes the good does win.

Has anyone seen the video, you are all asking for everyone's job but what if there were officers who just stood there and did nothing. I bet you ask why did they not do something about it, good question put yourself in the same shoes. I do not know how much I could type in hopes you understand, I bet a bunch of you were asking for the officers job in that taxi situation. The judge himself stated that when the taxi driver swung missed and fell to the floor there was no more altercation, so how did the officer break his wrist and finger? Just remember when you point a finger, there are four other fingers pointing back at you.

So perhaps the previous posts appeared before the video was released to the public -- that's about the only explanation I can find for some of the idiotic statements below.

Really people, the cops acted inhumanely towards Ms. Bonds. That is CLEAR from the video. That the arrest in the first place was ruled out of order should tell you a lot about what was going on in that station house that we could not hear on the tape.

@Fast_life424 - where in the world do you live?! What can you do about an injustice perpetrated by those we empower to bring justice? EVERYTHING! The laws were written by people, they will be changed by people.

We need to hold people accountable for their actions. Even cops are citizens.
Sorry to burst your bubble, but race and class do come into play. If Ms. Bonds was a foreign diplomat, this would become an 'international incident'. If she were a rich, white woman -- she would probably never been arrested in the first place.

Policing is tough. I get it. If you can't do it without resorting to animal-like behaviour, then it's time you find a new career.

If you do feel the need to abuse the poor and people of colour, for God's sake, seek professional counselling.

As for the rules governing how and when police officers can be disciplined, obviously those need to be overhauled.

Finally -- the police are investigating themselves?! How in the name of all that is rational, can that make any sense at all? Those SIU stats as so very disheartening.... Who's watching the watchers?