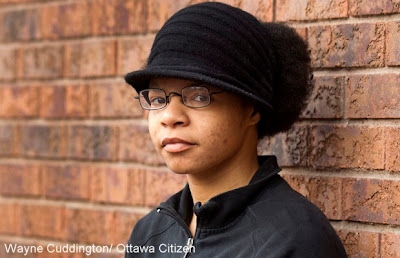 A woman of colour, returning home after a party. A false arrest, a sadistic police sergeant, a trumped-up charge, a prosecutor attempting to jail the victim.

But this is Ottawa, 2010. A judge called a halt to what he rightly called a "travesty." He couldn't ignore the videotape that showed a sustained assault on an unresisting prisoner by police officers, and the sexual and emotional humiliation of their victim.

Stacy Bonds, a 27-year old theatrical makeup artist, was simply walking on the street. As reported, she was stopped by Ottawa police for no reason, and held until she was run through the police computer. She was then told to proceed on her way.

But this uppity woman didn't know her place. She turned and asked them why they had stopped her.

She was immediately arrested for "public intoxication," although the judge found this an unlawful act because she was nowhere close to being drunk. She was handcuffed, thrown into the back of a police cruiser, and taken to the police station.

What then happened was recorded by a videocamera in the station. Showing no signs of resistance, Bonds was viciously kneed in the back, her hair yanked, and a hand thrust into her pants. The arresting officer, Const. John Flores, didn't once let go of her.

Bonds was then thrown to the floor with the use of a riot shield. Her shirt and bra were cut off by Sgt. Steve Desjourdy, and she was strip-searched in the presence of several male officers. She was then left in a jail cell for three hours, half-naked, and ultimately charged with that old butt-saving favourite, "assault on police."

Desjourdy has been in trouble before, for kicking and Tasering a female prisoner a mere few days before this incident. For that he was given a three-month demotion to the rank of constable in 2009. Must have stung.

He claimed that his victim had "mule-kicked" a constable behind her, justifying his use of force. But the videotape showed no such thing.

The judge berated the officers for the strip search, calling it "an extremely serious breach of [Bonds'] rights, apart from it being unlawful." Her lawyer, Matt Webber, was less restrained: "It's an appalling example of abuse of power and misconduct on the part of the police. It's a complete disregard for her dignity. It's shocking."

What I find particularly interesting is the fact that the entire assault on Bonds was carried out under a police videocam, but the officers involved simply lied, as though no such record existed. Such is the culture of police impunity that they obviously imagined the system would save them no matter what.

The Crown's decision to proceed to a trial, once again proving the adage that police and prosecutors are stuck together with Krazy Glue, must have reassured them. But they all ran into a judge who didn't have a bandage over his eyes. He stayed the bogus charge against her, and went on a refreshing rant against her victimizers.

Police Chief Vern White has promised an "internal investigation." White does appear to be a cut above the usual police chief, regularly reaching out to the community and so forth, but that may simply indicate his mastery of effective public relations. In this case, he hedges: "If the judge's ruling is indicative of what happened, it's appalling."

If? Roll that video for the chief, please.

We'll see what comes of this investigation, which could take months. Meanwhile, I assume that the officers involved are still on the job, serving and protecting.

For her part, Bonds says she is thinking of suing. Thinking? Here's one observer who would be willing to part with some cash to get that process started. Outside her acquittal, a lawsuit may provide the only justice she ever receives.

UPDATE: My sometime editor at the National Post, Kelly McParland, weighs in. The message? Fire. Them. All.

What does this tell us? Far from firing this thug, or at the very least suspending him without pay until the conclusion of his two-years-late "internal investigation," Chief White will retain him on the force at full salary. And the other officers involved in a gang assault on a 100-pound Black woman are still out there "dealing with the public."

For over two years the Ottawa Police have had these police video tapes in their possession yet only now that the case has gone public is Ottawa police Chief Vern White getting around to promising what he has the gall to refer to as "a swift internal investigation" ?

You didn't read very carefully. To give a synopsis: this could have been Mississippi--it had all the elements--but it's Ottawa, and so things have unrolled a little differently.

Bonds was strip=searched in front of at least three male officers and one female officer, who kicked her and yanked her hair.

Desjourdy was given a temporary demotion for a previous assault on a female prisoner. Once that three-month period passed, he returned to his old rank.

This is appalling! They should fire all those directly involved in her assult, and make all who remain attend sencitivity training. Make them go through the experience of such a strip search themselves. Maybe then they will see how horrible, what was done to her actually is!

THEY should all be fired!!! and NOT just the police officers...but the prosecutors who are also a VERY VERY active part in this GANG activity!!!!!

This was a response to a lengthy comment by k_z which appears to have disappeared in the transition. Apologies to all. Things should be back to normal shortly.

I don't just want them all fired. I want them all arrested and charged with common assault, sexual assault, false arrest, false imprisonment, and mischief, just for a start! We should start a fund for the young woman's legal fees. I'd happily contribute!! OUTRAGEOUS. And it IS just the tip of the iceberg.

Yeah, my reaction exactly. "Thinking" of launching a lawsuit? I suspect the city solicitor is already working out how much the cheque should be for.

She needs to sue. Hit the city really hard. It's the only way for the police to learn.

What disturbs me most about this case - aside from the facts, of course - is that it is NOT unique. That's the scary part.

The Law doesn't allow for Police services in Ontario to suspend officers with pay.

Next time know the facts before you allow yourself to rage against the Chief.

I'll rage against the Chief for taking half-hearted measures regardless. You are correct about Section 89 of the Police Services Act, however, and I have added a footnote to my subsequent post.

Why isn't Desjourdy sitting at home instead of reporting to duty? And what of his co-animals who abused this woman?

What a blasted PIG...I guess the name is very fitting....Obviously he has that rapist mentality, because when I read this story that's what comes to mind...RAPIST WITH A BADGE...Shame on them !!! And to think our hard earning tax money pays their salary...I'M DISGUSTED !!! and hope to God she sues their asses !!!!!! I could only imagine how demeaning that was for her...Scared for life by people who swear to protect !!!!!

First off, who wrote this poorly written article? Sounds like something from an 8th grade essay.

Anyways, lets drop the "100lb weight" or "race" card. I am not siding with any side but I am here to post the reality of an article that is bias and favours one side.

We all know weight has no issue, does not matter if you weight 85lbs or 285lbs everyone knows the most dangerous people are of the smaller stature because they are not taken seriously.

Race, just because she is of a different colour, do not drop the race card because Ottawa is a multicultural City and the Ottawa Police Service is also growing in diversity.

Is the video of this incident posted? I could not locate it but if it is not then how are you able to judge it? Though a Judge viewed it but and made their own opinion, I am just saying think about is the glass half full or half empty.

I am not saying that this did not occur, and I am sure some things were wrong. But think, if she sues it is the public that ends up paying because the taxes will always just go up each time someone sues the police, fire, ambulance, city etc. Their gain is our loss, therefore don't complain if your property tax goes up, HST was put in for a reason the government has to collect its losses. And if you think about it, if the city is sued over 3 million a year, they raise taxes by 3% with nearly a million people in Ottawa they are up $30 million or even more.

Members of OPS are always welcome to post here. Welcome!

I'll right away grasp your rss as I can't in finding your e-mail subscription link or newsletter service.
Do you have any? Kindly let me recognize in order that I could subscribe.

I am in fact thankful to the holder of this web
page who has shared this great paragraph at at this time.


Feel free to surf to my weblog women's armitron watches