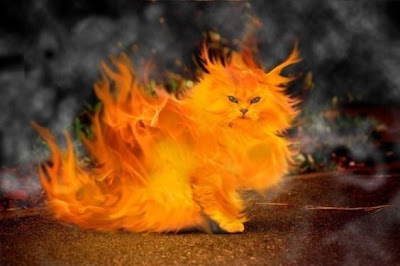 Picking up from where I left off last evening:

The squalling of Barbara Kay at Five Feet of Fury to which I responded yesterday was soon followed up with a ripe email to me, quickly channeled by Mr. Kathy Shaidle, while Katty Kathy came over to mew at my place (the new system doesn't provide comment permalinks, so happy hunting). I feel like some sort of nexus--or, under the circumstances, "catalyst" might be a better word.

Misspelling my name throughout, Kay hisses and spits at Antonia Zerbisias, then earnestly assures me at some length that she (Barbara, that is) is much funnier than I am, and that her laboured commentary at FFF was intended to be--wait for it--"ironic."

Unaccountably, Mr. Shaidle edited out this protestation: "I am not without a sense of humour, as you imply. I am actually so funny that I have been asked TWICE to be part of the Leacock Debate at Hart House, one of the very few in its ten-year history to have that honour. Look it up -- it's about being humorous." Kamarad! Kay then nuzzles Kathy and takes her leave.

Shaidle's own hate-on for Antonia can be traced as far back as 2004, but in February 2005 matters came to a head. This was some time before I had taken up the invidious practice of blogging myself, as the semi-legitimate form of self-indulgence that it is.

It seems that a bash for right-wing bloggers was held in Toronto in February of that year. And Antonia crashed it--or, more accurately,* swept in and captivated all the men in the place. This did not sit well with displaced Star ex-columnist Kathy Shaidle, filling her face at the time with greasy potato skins. She subsequently wrote one of her charming commentaries, simply oozing with her trademark spite and envy.

Thanks to the Wayback Machine, we have some wonderfully bitchy comments from Kevin Michael Grace in response, who, with acerbic smoking-jacketed aplomb, makes short work of not one but two of my least-favourite felines. Here's a taste:

A typically illiterate communiqué was issued from the Saskabush bunker occupied by Kate "Why Oh Why Doesn’t The MSM Report The Good News From Iraq?" McMillan:

Er, is there a Mr McMillan?

He then turns his baleful attention to Shaidle:

Above all, Shaidle wants it to be known she is a woman of import. She clings to her amour propre as a savage clings to his talisman (or a Shaidle to her stodge).

And here, if I may, is the coup de Grace:

In the words of the immortal Charles Pooter,

I have often seen reminiscences of people I have never heard of, and I fail to see—because I do not happen to be a "Somebody"—why my diary should not be interesting. My only regret is that I did not commence it when I was a youth.

My only regret is that I did not realize sooner that Kathy Shaidle is our own Ms Pooter. A furious "Nobody," to be sure, but all the funnier for that. She is the troll under the blog whose snarls serve to remind us how blessed we are in comparison. She is a national treasure.

OK, I 'll admit what my mother always insisted was the case: men can be catty, too. In his case, delightfully so. And, it seems, timeless in his observations as well. Meow!

_____________
*Two commenters thus far recall that Antonia was actually invited. UPDATE: Yup. Z. has confirmed that she was invited by The Meatriarchy.