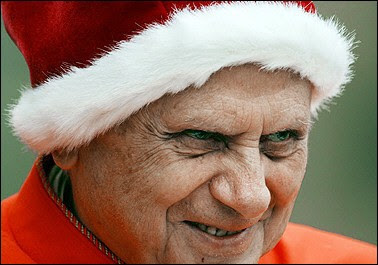 The Pope, during his excursion into Britain, today equated atheism and Nazism. This, as the journalists say, has caused a stir. Richard Dawkins is fit to be tied, as well he might be.

But according to the Church, it's all been overblown and misinterpreted: the Pope, says a spokesperson, knows "rather well what the Nazi ideology is about."

Odd how comments seem to disappear.Also odd is that you seem to imply that Ratzinger is a Nazi because he was in the HitlerYouth when he was 14 years old,yet you have many posts where you claim Omar Khadr is innocent (even if he did kill someone) because he was a child soldier.

Not as curious as an attempt to draw a moral equivalence between the Pope and Whoopi Goldberg.

Good grief, get a grip, man.