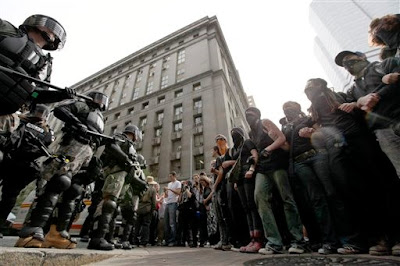 From the Globe & Mail's Tabitha Southey:

An officer threatened to arrest me for standing on the street (I was with a journalist and a photographer who lives in the building that we were in front of), but after two days of the G20 in Toronto, I was almost as inured to that threat as I was to the random searches I saw going on, everywhere, blocks away from the designated high-security zone.

Earlier that day, well before the much-publicized destruction on Yonge Street, I'd been threatened with arrest for “obstructing” a search by trying to take a picture (at a respectful distance) of two young men being searched.

An officer there had tried to grab my cellphone. Other officers had crowded around. They boisterously mocked the psychiatric patients coming out of the mental-health hospital behind me.

But her colleague Christie "I love a man in uniform" Blatchford drones on--as always, it seems, a walking example of the Ishmael Effect.