And in other news, crime is down again ... 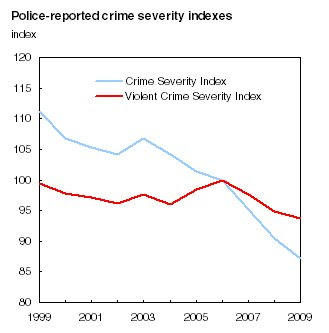 From StatsCan today : The numbers, rates and severity of crimes reported to police dropped again last year, continuing a 10-year trend. StatsCan Tables here.
Aha! say the Harperclones, that's because people aren't reporting crimes to police.
Yeah. Sure. That must be it.
The crime rate, a measure of the volume of crime reported to police, fell 3% in 2009 and was 17% lower than a decade ago.

The Crime Severity Index (CSI), a measure of the seriousness of police-reported crime, declined 4% in 2009 and stood 22% lower than in 1999.

Violent crimes, which range in seriousness from harassing phone calls to homicide, accounted for about 1 in 5 crimes in 2009. Police-reported violent crime in Canada is also declining, but to a lesser extent than overall crime.

Police identified about 165,000 youth aged 12 to 17 accused of a criminal offence in 2009. Both the number of crimes and the seriousness of crimes committed by youth have generally been declining since 2001, including a slight drop in 2009.

Compared to last year there were 17,000 fewer motor vehicle thefts, 10,000 fewer mischief offences and 5,000 fewer break-ins. Drug offences, serious assault, sexual assault and robbery are all down.
Nonetheless, the websites of Public Safety Minister Vic Toews and the Chair of the Justice Committee Ed Fast currently both state :

"Unfortunately, our safe streets and healthy communities are increasingly under threat of gun, gang and drug violence."

... which as it happens is an exact quote lifted from Harper's Throne Speech from back in April 2006.
.
The Public Safety Minister and the Chair of the Justice Committee will surely be updating their websites any time now, but in the meantime here is a bit of advice from the Corrections Canada website, unfortunately long since expunged in one of those gc.ca website purges :

"American politicians have often found it in their self-interest to use fear of crime as a strategy to win elections, by promising to wage war on crime.
It is ironic that in the United States, as in Canada, crime rates have been declining since 1991. However, by waging war on crime they have managed to double their prison population without making the United States a noticeably safer society than Canada.
We would do much to advance the public interest if we can better manage the fear of crime than our American neighbours."

So the solution to this, clearly, is to get rid of StatsCan