Counter-dissent: the case of Tarek Fatah 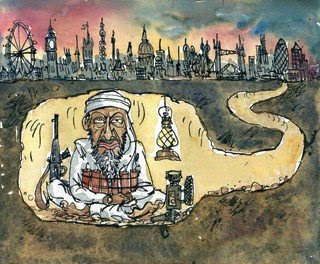 I thought this article was satire, at first, that had duped the perennially unwary.

I was wrong. Tarek Fatah is dead serious. Any satire is utterly unintentional.

Little Mosque on the Prairie, a tiresomely twee CBC sit-com effort, is nothing less, he says, than a vehicle for terrorism. But then, the indefatigable Fatah turns out to have had this bee in his bonnet for a while:

In early 2007, as the CBC was promoting Little Mosque on the Prairie with great fanfare, I expressed my misgivings about the project. Writing in a Toronto newspaper, I suggested the CBC sitcom reflected "an Islamist agenda" that was using comedy to lull mainstream Canadians into believing all-is-well in Canada's Muslim communities, despite evidence of a rise in extremism among Muslim youth. For example, Little Mosque made no reference to "the hijacking of...Islam by politicized clerics affiliated with Saudi Arabia or Iran."

The latter, I think, would have required one heck of a laugh track to keep the program's sit-com status intact. The suggestion reminds me of the scene in Natural Born Killers when Mallory's abuse by her father is presented in just this fashion. But we weren't meant to be amused by it. In Fatah's hands, I suspect, Little Mosque on the Prairie would include stonings and amputations, bomb-making and AK-47s, genital mutilation and burqas, and it wouldn't be funny either.

But of course Fatah doesn't want us to laugh. He has no patience with the comedic possibilities of cultural encounter. For him it's all documentary, all the time, and if we're laughing it's because we aren't paying attention. Worse, we're being lulled and duped. Because we all should know that Canadian Muslims--with the exception, of course, of Tarek Fatah himself (his involvement with the tiny Muslim Canadian Congress ended in 2006 after the latter split into two even smaller groupuscules) and Alia Hogben's Canadian Council of Muslim Women--are all terrorists or terrorist sympathizers or terrorist enablers or just plain folks terrorized into silence.

Now let me note up front, because one has to these days, that I have far more in common with Fatah than I do with the religious nutbars who ran weekly fun-for-the-whole-family Execution Nights down at the soccer stadium in Kabul, banned kite-flying, made it a crime to educate girls, and sent men to jail for trimming their beards. The Muslim Canadian Congress, and I presume Fatah as well, support a "progressive, liberal, pluralistic, democratic, and secular society where everyone has the freedom of religion." Leave out the word "liberal" and I'm there.

But Fatah insists on pretending that he's a brave voice crying in the wilderness. He paints much the same picture of Canadian Islamic communities that screechy xenophobes like Kathy Shaidle and the hérouxvillistes do. This gets him excellent media coverage and a lot of political face-time. Yet to hold everyone's attention, he needs to make wilder and wilder assertions. Ramping up paranoia from the perceived vantage-point of an apostate, or, at least, a maverick, Fatah now claims that the cast of Little Mosque on the Prairie, by virtue of collecting donations for a food-bank in concert with two more somewhat more official Muslim organizations than the one he left, is engaged in subversion.

One of these organizations is the Canadian chapter of the Council on American-Islamic Relations. Fatah doesn't talk about the Canadian chapter, though: instead, he goes on and on about wealthy donors from Arab countries who have provided money to CAIR in the US, and notes that some of the parent organization's associations have been less than savoury.

The other group is the Muslim Association of Canada, which, as he notes in his pearl-clutching manner, is made up of supporters of the Muslim Brotherhood, which admittedly has had a chequered past--to put it mildly. But the MAC's own stated goal is "[t]o establish an Islamic presence in Canada, that is balanced, constructive and integrated though distinct, within the social fabric and culture of Canada." It's hard to argue with that. And anyway, in the case at hand, MAC just wants to collect for a foodbank.

Fatah's conclusion is a keeper:

MAC and other Islamists can fly under the radar and even manage to appropriate the CBC name and logo in their plans.

The question all Canadians should be asking is this: What good is it to send our troops to fight the Taliban in Afghanistan when our own public broadcaster is tricked into according respectability to Islamist organizations that share the same doctrine of Jihad?

I hope Hubert Lacroix, the new head of the CBC will recognize that the good name of the public broadcaster is tarnished as a result of partnering with CAIR and MAC. Lacroix should ensure such a hijacking of the CBC is prevented in the future. The world is witnessing a world-wide struggle that is pitting ordinary Muslims against well-funded Islamists. The least the CBC can do is not side with those who wish to implement the Muslim Brotherhood agenda on Canada.

"[H]ijacking of the CBC?" This is simply neo-McCarthyist raving. We're talking about a food drive, not flying planes into the Peace Tower. Even members of fundamentalist groups like MAC lift their dripping fangs from the corpses of innocents from time to time to share meals, give to charity and engage in the routines of family life and citizenship. And when pressed, they tend to sound like boring old run-of-the-mill social conservatives: they're opposed to abortion and feminism and same-sex marriages. Under other circumstances, there is a vast potential here for political alliances of quite a different sort than the one that allegedly exists.

But Fatah's hyperbole goes with the role that he has thrust upon himself. And the media lap it up. Why?

We might in fact ask the same question about other counter-dissidents--that is, members of groups where political dissent has arisen, who reject the dissidents and embrace the Establishment. Anti-feminist women are media darlings, for example. There was Phyllis Schlafly, who traveled up and down the USA to argue that women should stay at home, and who eventually helped to kill the Equal Rights Amendment. There's the light and lively Camille Paglia, always good for a sound bite, and of course Ann Coulter.

Once we see this sort of thing for what it is, of course, the question really answers itself. There is nothing quite so rare and valuable to the corporate media than a counter-dissident, who carries the authority of his or her background in the very act of breaking with dissidents, and can be counted upon to say things about the dissidents in question that others cannot.

It is not my intention, of course, to portray Canadian Muslims as a single community, with a dissensus group at its core. But they are too often portrayed as such, a threatening collective Other in our midst whose ways are not "ours," posing an actual threat to what we take to be the Canadian way of life. That portrait, that series of stereotypes that the good burghers of Hérouxville so bravely confronted, is always with us these days. 9/11. Our troops in Afghanistan. The appalling Khadr family. And Fatah is making good use of it all.

Islamism, in fact, is the new Communism, not in the ideological sense--only a political illiterate could make such a claim--but in the sense of a Peril, an evil loosed upon us that good citizens must root out. Hijab-wearing soccer players! Eeek! Tented women wanting to vote! Democracy is at stake! May as well search the mosques for pods while we're at it. And be sure to look under our beds.

The far-right ignorantsia is historically prone to this kind of xenophobic feeding frenzy. But to see self-professed liberals pouring oil on the flames by adding their own wild talk to the chorus is alarming. The allure of fame appears to trump civil sobriety and good judgement. In the current maelstrom of uninformed confrontation, one can be sought after by the media simply by trumpeting one's own apostasy, and rather too easily become transformed from a spokesperson to a performer.

The problem is, however, that there is inevitably a shelf-life for this particular performance. Being opposed to fundamentalist Islam, after all, is hardly new or even interesting in itself. The latter is not a moving target like progressive feminism, but an ossified, cruel, narrow, intolerant and profoundly conservative ideology. The whole point about it is that it doesn't change. So anti-Islamist rhetoric quickly gets boring and repetitive.

We know that beheading prisoners is uncivilized. We know that lashing rape victims is cruelly wrong, and hanging gay teeenagers is barbaric. It's not hard for a Canadian, Muslim or non-Muslim, to make these and similar points with dignity and sincerity, and establish common cause with the majority, but for some the media limelight can prove intoxicating.

I believe that it has become just that for Tarek Fatah. The media haven't turned on him yet, but they will have to at some point to preserve their own credibility. Calling Little Mosque on the Prairie an Islamist plot is in exactly the same league as Phyllis Chesler's taxi-driver fifth column. What can we expect next--fluoridated water alerts?