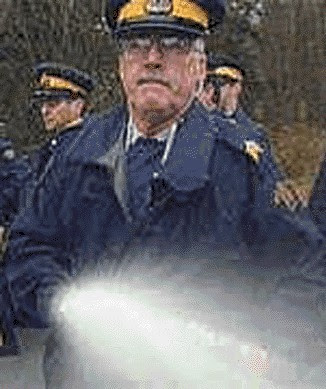 Guess who's the senior planner for the so-called "Integrated Security Unit" being run by the RCMP on behalf of the Vancouver Olympics organizing committee (VANOC)?

Hugh Stewart. Yup, the sadistic cop who pepper-sprayed non-violent students--and a CBC cameraman--during the APEC protests in Vancouver in 1997. Doesn't that just set the tone for policing before and during the games in 2010?

So it should come as no surprise that the hammer is being dropped, even as I write this, on anyone critical of that monument to hucksters' ethics, the Vancouver Olympic Games. RCMP officers have questioned twenty activists so far about their political beliefs, knocking on their doors to have a little chat.

Olympic critic Chris Shaw has been subject to continual police shadowing on what we might call the Chinese model. He is a UBC professor who was incautious enough to write a book that was less than favourable to the Vancouver Games. Shaw has been approached by plain-clothes cops, stopped in his vehicle, even detained at Heathrow Airport in London en route to a speaking engagement.

On one occasion two police officers detained him outside a coffee shop in Vancouver. One told him that he didn't like Shaw's book. The Mounties are hiring literary critics now?

When Chinese security made surprise "visits" to activists, it was front-page news worldwide with screaming headlines about the repressive, autocratic, military dictatorship.

It should be no different this year.

Canadians ought to be furious with politicians for letting it get this far. We should be jamming their e-mail, voice mail and snail-mail boxes in protest.