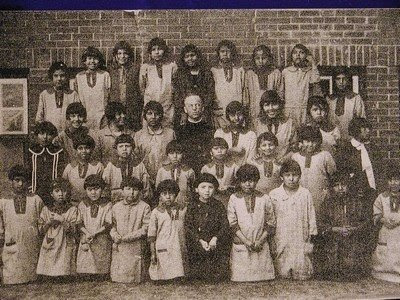 A certain pint-size hater owes me an apology--but I'm not holding my breath.

From today's Globe and Mail:

The federal government is mapping burial sites at former residential schools as researchers try to identify how many of the estimated thousands of native children who went missing from the schools are buried in unmarked or anonymous graves.

"On July 21, 1992, workers with N.I.S. Construction Ltd. uncovered three unmarked graves," the Indian Affairs document states. "On July 22, an additional 15 graves were encountered. They were located in a row paralleling the new gravity sewer main north of residence 0210-01. The contractor indicated there was evidence of another row of graves north of the first row encountered ... All remains unearthed were placed in plastic bags and stored in a locked building."

From the Globe story:

At another school, the St. John's Indian Residential School in Alberta (also known as Wabasca Residential School), the researchers found a document from 1961 describing how the principal came across an unmarked cemetery. A second letter indicates the unidentified principal ultimately cleaned up the site and erected 110 white crosses.

It's a pretty safe bet that this is only the tip of the iceberg. It will be interesting to watch the contortions of the denialists now.
Posted by Dr.Dawg at 8:59 AM