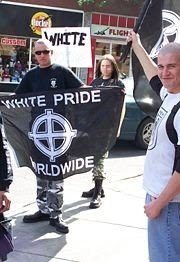 Where Nazis caper unmolested*, the government robs its own piggy-bank and public health doctors are fleeing en masse:

But one of the doctors immediately contradicted the minister, saying she has no other job in the works.

"It's not all about money. It's a combination of things," said Dr. Ameet Singh. Her contract expires in August.

Liepert insisted Wednesday that he didn't mean to leave the impression that the doctors were leaving for other jobs. But he refused to discuss specifics of their departure.

He also repeated his assertion that the province simply couldn't match the salary levels that are "out there" for these doctors.

Premier Ed Stelmach and Liepert both said they don't know what the doctors are paid compared to people in the same position in other provinces.

However, Stelmach offered high praise for the doctors who are leaving. He says they had "tremendous input into health policy."

Stelmach also suggested the province is being cautious about salary increases for any government employees because other public sector workers are also looking for raises.

"I keep hearing from the public, 'Your spending 40 per cent of your budget on health. What if the economy starts to slide, how can you support this?"' said Stelmach.

"We've got to find the balance someplace in terms of what we expect from our revenue stream into the future."

Recently, Stelmach and his 23-member cabinet voted themselves a 30 per cent pay increase, making them the best paid provincial politicians in Canada.

[H/t Kate McMillan for the idea for an on-going parody series.]