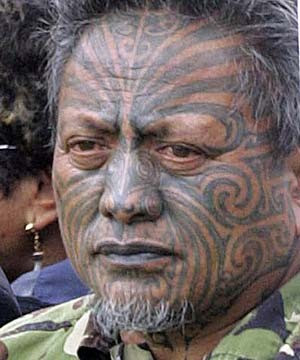 Under an anti-terrorism law passed in 2002 (let no one think that New Zealand is behind the times), Māori, environmentalist and peace groups across the country have been raided or "visited" by black-uniformed police. 17 people have been arrested so far, allegedly for taking part in "terrorist training camps." By no coincidence, the raids took place at the same time as the New Zealand government is actively considering strengthening the Terrorism Suppression Act. The best-known of those rounded up is veteran Māori activist Tame Iti, shown in the picture.

Reaction has been swift. "It's not the first time that Māori have been targeted as terrorists," said Māori Party co-leader Tariana Turia. "We know some years ago when Māori people went to Cuba they were accused of terrorism then, nobody's blown up since then."

A number of other commentators have raised serious concerns. Barry Wilson, from the Council for Civil Liberties, noted the suspiciously broad scope of the police action: "[P]eace groups, community groups, anti-mining protesters, the Save Happy Valley coalition" were targeted, he said.

Union officials have pointed to the suspicious timing of the raids. "The police have raised the spectre that there is terrorism involved here... I'm willing to predict now, that that will quietly disappear because they will not have evidence of terrorist activity. In the meantime, they've created this climate of fear in the community, as a way to push forward the latest anti-terrorist legislation," said union organizer John Minto.

A counter-terrorism expert at the University of Canterbury, David Small, put it best: "They say now the public has nothing to fear because they've nipped this in the bud, but raising this whole spectre does create a climate of fear... and this is a way to use and to increase the resources [and] the powers police and the surveillance agencies have got."

Stay tuned: this is going to get interesting. Kia kaha, e Tame.

A demonstration against the raids:

Another counter-terrorism expert weighs in.

The criminalization of indigenous protest:

44. One of the more serious human rights protection deficiencies in recent years is the trend towards the use of laws and the justice system to penalize and criminalize social protest activities and legitimate demands made by indigenous organizations and movements in defence of their rights. Reports indicate that these tendencies appear in two guises: the application of emergency legislation such as anti-terrorist laws, and accusing social protesters of common misdemeanors(such as trespassing) to punish social protests. Examples from various parts of the world have come to the attention of the Special Rapporteur.

Rodolfo Stavenhagen, Report of the Special Rapporteur on the situation of human rights and fundamental freedoms of indigenous people (E/CN.4/2004/80), COMMISSION ON HUMAN RIGHTS, Sixtieth session, Item 15 of the provisional agenda, 26 January 2004, para. 44.

And why the new anti-terrorist measures are bad for New Zealand. (H/t Ana from the tino-rangatiratanga listserv)
Posted by Dr.Dawg at 9:23 AM