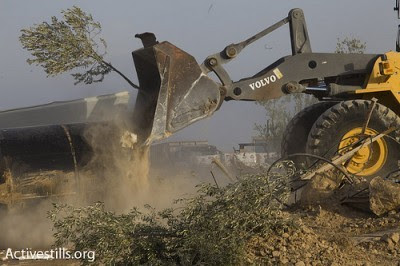 Once again, Israel is willing to give up peace for a little more land.

Meanwhile, within Israel proper, the destruction of Bedouin villages and the displacement of its inhabitants continues, in this case to make way for a reforestation project sponsored by the Jewish National Fund.

Warning: the use of terms such as "ethnic cleansing" and "apartheid" is to be avoided, as they are considered to be examples of "the new anti-Semitism™." Please employ "urban renewal" and "reclamation initiative," respectively.

UPDATE: (October 16) Just another day on the West Bank. Might I suggest the term "deforestation" in this instance? [H/t Alison]

Depends on context, doesn't it.

(BTW, I read some of Phillipe's steaming accompaniment to Mater, so I'll modify my previous statement: the one who shouted it at you was right.)

I don't even have to look up those quotes, since they are trudged up so often. The context of the 2006 invasion of Lebanon certainly makes a difference for the Finkelstein quote, and Neumann was talking about the more-or-less unpreventable nature of having true anti-Semites latch on to your legitimate criticisms of Israel.

I think we can avoid the "no true Scotsman" fallacy by asking how alliances with armed theocrats can advance any of the stated aims of the Left. I know nothing of QPIRG's take on the Army of God, nor the nature of their "campaign." Perhaps Philippe can provide details, or, better, a link.

Nor does the frequent use of shudder-quotes impress me. When I see the word "democratic" applied to Hamas, I have to wonder if that's Philippe himself, setting up another straw man. Well?

So Quebec isn't a democracy either?
Of course it's possible. It's about a balance between collective rights and individual rights and a respect for minority rights. It works as long as there is a strong Jewish majority, which there is. It doesn't work if that's not the case and why there is urgency to implementing the two state solution.
But even if you were right, I'd still say this idea of the activist leftist elites that it's ok to have 57 Muslim or Arab non-democracies (and we must cowtow to them) but it's not ok to have one like Jewish non-democracy (even when in fact it is a democracy) is intellectually unsupportable.