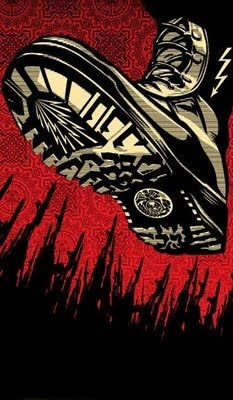 I blogged about this before: science-fiction writer and Canadian citizen Peter Watts was brutally assaulted by US Home Security thugs last December as he was returning home to Canada. In time-honoured fashion, the thugs then charged Watts with assault on them.

Now a Michigan jury, obviously eager to show a Canuck who's boss, has found him guilty of "obstruction." Watts faces up to three years in an American prison--for asking a question.

He's awaiting sentence, and so he's talking nice. Apparently asking an officer "What's the problem?" when being ordered to the ground after a major beating was sufficient "obstruction" for the authorities, and for that wretched jury of his peers. Here is the prosecutor (this is best read in a Colonel Klinck accent):

"An officer gives you a command, you have to listen."

The scuffle happened on Dec. 8 as Watts was returning to Toronto after helping a friend move to the U.S. He had driven to Nebraska with a friend to help a University of Toronto professor relocate.

As he crossed the Blue Water Bridge on his way to Sarnia, U.S. customs officers pulled him over. When two guards began rifled [sic] through his car, Watts got out and asked what they were doing.

During the melee, one of the guards said he felt like he was being choked by Watts, so he repeatedly elbowed the author, Kelly said.

Outside the car, the guards ordered Watts to the ground, but he stood motionless, asking what the problem was.

“After several commands, he was maced,” Kelly said.

Note the transitions here: he asked what the customs officers were doing, which caused a "melee," which led to being elbowed and maced. In fact, evidence at trial exposed serious inconsistencies in the officers' accounts--they lied, in other words--and they were conclusively shown to be the mindless thugs that they are.

From the victim himself:

What constitutes "failure to comply with a lawful command" is open to interpretation. The Prosecution cited several moments within the melee which she claimed constituted “resisting”, but by her own admission I wasn’t charged with any of those things. I was charged only with resisting Beaudry, the guard I’d "choked". My passenger of that day put the lie to that claim in short order, and the Prosecution wasn’t able to shake that. The Defense pointed out that I wasn’t charged with anything regarding anyone else, and the Prosecution had to concede that too. So what it came down to, ultimately, was those moments after I was repeatedly struck in the face by Beaudry (an event not in dispute, incidentally). After Beaudry had finished whaling on me in the car, and stepped outside, and ordered me out of the vehicle; after I’d complied with that, and was standing motionless beside the car, and Beaudry told me to get on the ground — I just stood there, saying “What is the problem?”, just before Beaudry maced me.

And that, said the Prosecutor in her final remarks — that, right there, was failure to comply. That was enough to convict.

Watts is way too kind when he suggests that the jury was working from a bad statute. I don't have to be. This was lockstep fascism in action, folks. And there's more coming.

Watts is to be sentenced on April 26. Unbelievably, the prosecutor is seeking an enhanced sentence:

Jurors returned the verdict about in St. Clair County Circuit Judge James Adair's courtroom. He will be sentenced April 26. Watts, 52, faces up to two or three years in prison. Senior Assistant Prosecutor Mary Kelly said officials are trying to determine if Watts' 1991 conviction for obstructing a police officer in Guelph, Ont., can be used to make him a habitual offender per Michigan's laws.

Habitual offenders face enhanced sentences in Michigan. If the 1991 conviction doesn't count, Watts faces up to two years in prison. If it does, he faces up to three years, Kelly said.

Here is the email address of the US Embassy in Canada. The Ambassador's name is David Jacobson, and the correct form of address is "Your Excellency."* You know what to do.

UPDATE: (March 21) More from Cory Doctorow. More from Peter Watts. Obedience to authority was the crux. As was the case here. And of course here.