Politics and the IAW: twist my arm! 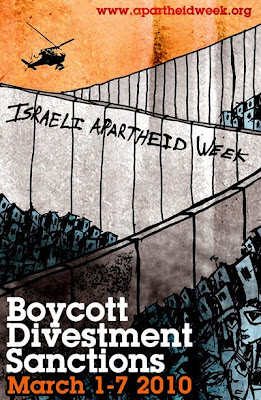 The campaign against Israel Apartheid Week is going full-steam ahead. Last week the Ontario legislature unanimously passed a motion condemning it.* The federal Liberal leader, former human rights advocate Michael Ignatieff, has recycled his chastening comments first made a year ago. And--if all goes according to plan--the House of Commons will shortly vote in favour of this motion, to be introduced by Tim Uppal, Conservative MP for Edmonton-Sherwood Park:

This all looks pretty compelling: a developing wide-spectrum consensus that IAW is a Bad Thing. It's enough to make a critic of Israel feel, I dunno, delegitimized. In this corner, legislatures, political leaders and the major media. In the other one, some artists in Montreal and a handful of bloggers. And the students, of course.

But maybe a little closer attention is required. Never mind the cold comfort we might take in the fact that only 30 MPPs (out of 107) were sitting in the Ontario legislature when the anti-IAW motion passed. More to the point: are our leaders really saying what they think?

Take Ignatieff, for example (please). Has he always been a fierce, uncritical champion of Israel, right or wrong? Well, no.

Two years ago, an American friend took me on a helicopter ride from Jerusalem to the Golan Heights over the Palestinian West Bank. He wanted to show me how vulnerable Israel was, how the Arabs only had to cross 11km of land to reach the sea and throw the Israelis into it. I got this message but I also came away with another one. When I looked down at the West Bank, at the settlements like Crusader forts occupying the high ground, at the Israeli security cordon along the Jordan river closing off the Palestinian lands from Jordan, I knew I was not looking down at a state or the beginnings of one, but at a Bantustan, one of those pseudo-states created in the dying years of apartheid to keep the African population under control. [emphasis added]

And here he is again, on the bombing of civilians in Qana during the Israel-Lebanon war in 2006. He was apologizing, in fact, for saying earlier that he "wasn't losing any sleep" over it:

"It was a mistake. I showed a lack of compassion. It was a mistake and when you make a mistake like that, you have to admit it," he told the French-language Radio-Canada program Tout le monde en parle.

"I was a professor of human rights, and I am also a professor of the laws of war, and what happened in Qana was a war crime, and I should have said that. That's clear." [emphasis added]

But two years later, he was apologizing for his apology.

Closer to my own neck of the woods, NDP MPPs in the Ontario legislature joined in to support the anti-IAW motion. But here is the leader of the Ontario NDP, Andrea Horwath, in a subsequent exchange with Andy Lehrer, of Independent Jewish Voices:

On Thursday, MPP Peter Shurman (Thornhill) introduced a private member’s motion that was divisive by nature. Singling out activists or shutting down debate, on this or any other matter, is not constructive and is entirely unhelpful.

Ontario’s New Democrats believe in finding avenues towards a peaceful solution in the Middle East. MPP Peter Shurman’s motion did not contribute to that in any way.

Was gibt? Are we seeing political opportunism here in its full glory? More than likely, but that really misses the point. What makes it opportunistic to take a harsh, uncritical line in support of the behaviour of the state of Israel?

The answer, I think, is really rather simple: no politician wants to be branded an "anti-Semite." Canadians are too decent to tolerate that kind of hatred, and certainly not in our leaders. But as we've been seeing, "anti-Semitic" has become a term of wider and wider application. These days it not only refers to Holocaust-denial, racial slurs, the fire-bombing of schools and the desecration of Jewish cemeteries--the real thing, in other words--but to criticizing Israel, and showing support for the brutalized Palestinian inhabitants of the West Bank and Gaza.

No less a person than our own Prime Minister has set the tone, calling criticism of Israel "anti-Semitic" and suggesting that some MPs were akin to Nazis. The outright criminalization of such criticism is looking more and more likely. In this kind of atmosphere, defending oneself against a public denunciation for alleged "anti-Semitism" is, quite simply, a losing proposition. In today's political climate, you're guilty until proven innocent.

Politicians know that the new McCarthyists--B'nai Brith, the Canadian Jewish Congress--are keeping a watchful eye on them. When a politician steps out of line, he or she is quickly slapped down without ceremony. Just ask Ontario MPP Phil McNeely, who was rash enough in 2006 to be critical of Israel's conduct of the Israel-Lebanon war. Not only was he forced to issue a grovelling apology, but Premier Dalton McGuinty personally telephoned the Canadian Jewish Congress to give them his reassurances.

It will be an intrepid MP indeed who dares to vote against the upcoming Uppal motion.

And meanwhile, the debate itself rages on.

UPDATE: Reader "Frank from Quebec" draws my attention to this article by Glenn Greenwald, appearing by coincidence just this morning. While the Israeli leaders quoted are talking about the future, not the present, it is still worth noting that the other a-word can apparently be used more freely in Israel than here at home.