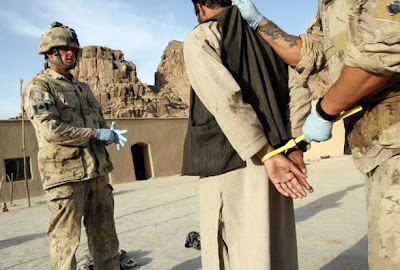 Redacted and unredacted versions of the same Torturegate documents indicate that the only "security" worrying the Harper government has been its own, and undermine its current desperate defiance of Parliament.

Readers may recall that NDP foreign affairs critic Paul Dewar was able to brandish both a redacted and an unredacted copy of the same memo--which Richard Colvin would have signed off on--nearly two weeks ago, in which the word "torture" was one of the redacted words:

"What we've seen from this government is a whole lot of redaction, in other words blacked out documents," charged Paul Dewar, NDP foreign affairs critic. "It's like reading tea leaves."

Dewar produced his own document, obtained through an access to information request, showing that the government had blacked out a reference to torture in a 2006 report from its own Foreign Affairs bureaucrats on the state of human rights in Afghanistan.

The original, unedited, document, which was leaked to the media in 2007, concluded that "extrajudicial executions, disappearances, torture and detention without trial are all too common."

Now we have today's revelation that Canadian authorities provided cover for a corrupt governor of Khandahar province, Asadullah Khalid, a charmer who, according to the Afghan Independent Human Rights Commission, kept his own private dungeon where he could torture detainees in peace. Thanks to Canadian intervention, he remained in his post:

The revelation about Asadullah Khalid, who stayed on as governor two years after concerns about his notorious reputation were raised, opens up another embarrassing avenue of inquiry over Afghan prisoner abuse.

The new allegation is contained in a two-year-old end-of-mission report by Richard Colvin, the whistleblower foreign service officer.

Colvin's disgust that Canada would support a "known human-rights abuser" was palpable and formed the most incendiary paragraphs of the report. References to Khalid were entirely blacked out in the version of the report publicly released to the Military Police Complaints Commission.

But an uncensored version of the report was shown for the first time to The Canadian Press on a confidential basis.

"As far as I know, Canada has never suggested to (President Hamid) Karzai that Asadullah be replaced," says the memo, dated Oct. 24, 2007.

"In the one meeting where the subject was discussed, in July 2006, it was the president who raised the issue; Canada defended the governor, thereby ensuring his continued tenure." [emphasis added]

The war apologists' strongest point so far has been that much of what had been reported happened prior to a tightening up of the detainee protocols in 2007, so that we've really been arguing about ancient history. All fixed now.

Khalid remained governor of Khandahar until 2008, with Canadian support. And today, the Globe & Mail's Paul Koring has uncovered the inconvenient truth that the much-ballyhooed new detainee transfer protocols put in place in 2007 aren't working:

An unknown number of Taliban insurgents captured by Canadians and turned over to Afghanistan's secret police are unaccounted for – a serious violation of the Harper government's “improved” detainee-transfer agreement and one that may endanger Canadian soldiers.

The latest detainee-transfer problem to emerge also threatens to undermine Prime Minister Stephen Harper's assertion that “two, three, four years ago” his government fixed the problems that put Canada at risk of violating the Geneva Conventions by transferring detainees into torture.

“This issue has long since been dealt with,” Mr. Harper said last week.

Another lie. And add to that the testimony of one of Los Tres Generales, Maj.-Gen. David Fraser, who claimed before the parliamentary committee investigating detainee transfers that he'd been unaware of allegations of abuse on the part of Khalid. He was ground commander of Canadian Forces in 2006--and evidently spent his time in a sensory-deprivation tank.

More revelations are sure to come, a cleansing flood of leaks that threatens to engulf both the government and senior Canadian Forces figures. And judging by what's been revealed so far, it can't come soon enough.

UPDATE: Reader and blogger JimBobby was onto the mad governor story nearly two years ago. And, as he noted in March, 2008, the Afghan authorities have apparently had a catch-and-release scam going on for some time.