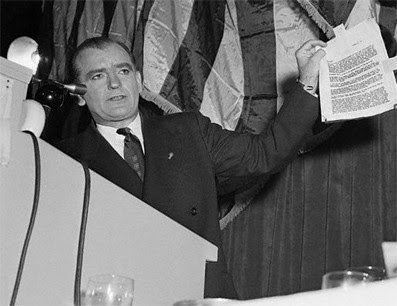 The floating signifier "Communist"--which, back in the day, could mean anything from supporting fluoridation of water, promoting rock music or even throwing a beanball*--has now been replaced with "anti-Semite," but the thuggish tactics of government remain unchanged.

The well-respected Canadian charitable organization KAIROS recently had a sizeable grant cancelled by Bev Oda, the Tory Minister of International Cooperation, abruptly ending the agency's 35-year partnership with CIDA . Allegedly, this was a mere restructuring of government international aid priorities.

But today we learn from immigration minister Jason Kenney that KAIROS has been blacklisted as an "anti-Semitic" organization, for being critical of Israel. It has also allegedly supported the international Boycott, Divestment and Sanctions campaign.

This is indignantly denied by the Canadian branch of KAIROS, although there is a small group of KAIROS Christians in Palestine which has embraced it. (Here is the latter's "anti-Semitic" statement: a passionate defence of the Palestinian people.)

But to Kenney, they all look alike.

[She] said Kenney's statement was based on incorrect information about her group's positions and raises serious questions about the politicization of the aid process by the Conservative government.

"You cannot label someone anti-Semitic because they criticize a government," she said.

Well said, Ms. Corkery, although yes they can. "Outrageous" works for me. But we can expect little else from a government whose Prime Minister has stated plainly that criticism of Israel is "anti-Semitic."

And so a four-year assault on Canadian democracy continues on many fronts, from subverting responsible government to the targeting of ordinary citizens and now to the suppression of charitable human rights groups.

How many more people and organizations are on the government's "enemies list?" And what will it take to put a stake through the Witchfinder General's black heart?

UPDATE: Oops! Someone forgot to give Vic Toews the new talking points.

UPPERDATE: Oops! Jason Kenney has been caught in a lie. Commenter Scott Tribe links to KAIROS-Canada's position on the BDS campaign, and to a press release that KAIROS-Canada has just issued. Check them out.
____________
*I'm forced to go on memory alone here, but I believe that the commentator in question had some connection to the San Francisco Giants.
Posted by Dr.Dawg at 10:21 AM