The OC Transpo strike and a vile talk-show host 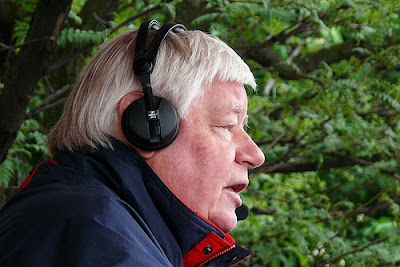 Here in Ottawa we have our own Bill O'Reilly--a bloated vulgarian by the name of Lowell Green, who has been growing ever more incautious in his little nest at CFRA.

He has now, according to one well-regarded local blog, threatened physical violence against striking OC Transpo drivers.

Here's the report from ZeroMeansZero:

Boy oh boy Steve Madely and Lowell Green sure didn't disappoint. Both beat the shit out of the drivers all morning yesterday with Lowell Green threatening to physically do damage to several people including one driver who Lowell wouldn't even let speak. Way over the top. Rumour is that [Ottawa Mayor] Larry O'Brien phoned the station afterwards to say thanks.

Our Lowell has a bit of a record of inflammatory anti-union remarks. Indeed, during my years with the PSAC, his hateful commentary against our union was the order of the day.

In 1998, according to CAW, Green urged drivers to ram picketers at the then-Corel Centre. (I was on that picket line myself, as it happens.) The result was a boycott of CFRA:

The Canadian Labour Congress has endorsed a national consumer boycott against radio station CFRA in Ottawa, Ontario after call-in talk show host, Lowell Green, encouraged listeners to drive over USWA members on a legal picket line at the Corel Centre, home of the Ottawa Senators.

The bargaining unit is made up of 75 cleaners, all but three of whom are part-time employees. The bargaining unit members have been without a collective agreement since March 7, 1997, when the Ontario Labour Relations Board issued a certificate.

The CLC executive council is requesting affiliates to ask their members to:

That boycott lasted until January, 1999, after Green was forced to deliver an on-air apology. Seems to me that another one is due. Or better still, why doesn't someone just fire the guy?

In our busy life, newspapers are most important
source of information. There were also interesting garden "flowers", made from tin
cut into petal shapes, bolted together on an aluminum rod,
with bottle caps as the center. The news that you as a reporter tend to report
must be based on fact. In just about every objective way that nations can be judged the
US is losing the present. This is standard cat behavior
I'm probably preaching to the choir here.