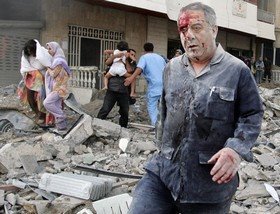 Canada has asked Lebanon and Israel to guarantee that they won't attack ships full of Canadian evacuees heading for Cyprus. Do the Lebanese armed forces have the time, inclination and materiel at the moment to bomb a flotilla of Lebanese-Canadian evacuees fleeing the country? Not all that likely: no harm in asking, though. But Israel? Whoa, hold on a minute...I thought that Israel never intentionally targets civilians. But now they have to be formally asked not to?
Back in the real world, civilians are continuing to die in large numbers--in fact, all but a handful of the Lebanese dead so far are civilians. And hundreds of thousands more have been driven from their homes, as Ehud Olmert continues his relentless "no exemptions" policy.

Former Israeli Prime Minister Ehud Barak is a little iffy on the subject of safe passage, as it happens. This interview, in fact, is well worth reading in full, and will be of special interest to those captivated by the surrealism that has descended upon that part of the planet. Here, for example, is Barak's stance on the role of the Lebanese government:

TONY JONES: But even the United States appears to acknowledge the Lebanese military and the Lebanese Government are too weak on their own to take on the hard core Hezbollah militia in the south. Do you really believe that Lebanon and Lebanon's army could have disarmed Hezbollah?
EHUD BARAK: Yeah. Until two years ago, the Government was a puppet government of the Syrians and they did not want to do that. But now there is a weak government, but a democratic one, that wants to see the Hezbollah dismantled and it's up to the world to back them in a convincing way and tell them, "We are behind you. Don't be frightened. We will come to your help if necessary to help you exercise your sovereignty over the whole sovereignty of Lebanon." I believe that if they will feel the support of the world leadership in their backs, they are capable of doing it. They are clearly willing to do it.
TONY JONES: But, Ehud Barak, how could they do that when Israel has effectively declared war on them, has bombed its civilian infrastructure, its international airport in Beirut has been bombed, sea ports, bridges, communication infrastructure, electrical plants, houses, vehicles on the roads, have been bombed by the Israelis. It's hard to see that the Lebanese Government would be able to do anything at all at the present moment. You've declared war on them.
EHUD BARAK: We did not - I repeat - we did not declare war on the Lebanese Government. We declared war on Hezbollah. I believe that no government on earth would accept the situation that someone tries to - Hezbollah tries to dictate to us, as well as the Hamas from the other side of the Gaza Strip. Namely, the first attribute of any legitimate sovereign is the monopoly on the use of weapons. No one would accept or enable where a political party, which has its Members in the Parliament, even the Government, has its own militia with weapons and they shoot rockets at will of the militia, not of the Government, into a neighbouring sovereign. That's no way to accept it. The primal contract of our Government with our nation, as well as your Government with your public, is to protect them. If this would have happened in Sydney or Melbourne, I have no doubt what Prime Minister Howard or his predecessors would have done. I'm talking from experience. I know him very well.

Barak is simply evading, and not very skilfully, I might add, the central question: How is the Lebanese government supposed to proceed?
At some points, the interview is almost Monty Pythonesque:
EHUD BARAK: If the Lebanese Government will order its armed forces to move to the south, backed by the international will, I think that it will dramatically reduce the level of violence and probably stop it.
TONY JONES: But only overnight 12 Lebanese soldiers were killed by an Israel air strike. I mean, I would imagine they would be afraid to send armed troops to the south for fear that they too would be caught up in the fighting.
EHUD BARAK: Oh, no. No reason for them to avoid it. We will not hit them.

On the seven Canadians killed, note the off-the-shelf apology (a version of which has been delivered to Stephen Harper by Ehud Olmert):
But, basically, only areas that are held by Hezbollah are attacked and normally you may say if what you have described just happened, of course, we regret it and I'm sorry for it.
Enough. I think the last word, under the present circumstances, should go to the beleaguered Lebanese Prime Minister, Fuad Saniora:

"Is the value of human life in Lebanon less than that of the citizens of other countries?" Saniora asked.


He also slammed nations that have said Israel is only acting in self-defence -- a thinly veiled swipe at the United States.

"Is this what the international community calls self defense? Is this the price we pay for aspiring to build our democratic institutions?

"Can the international community stand by while such callous retribution by the State of Israel is inflicted on us?" he added.

Unfortunately, all of Saniora's rhetorical questions have only one answer at present: Yes.
Posted by Dr.Dawg at 3:39 PM