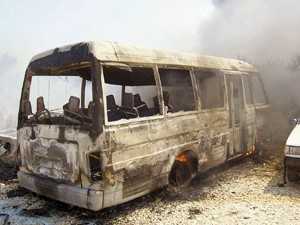 For once, I would like to be spared the usual "fog of war" excuses, the moral equivalence arguments (the lone rocket attack on Haifa, after days of Israel bombing civilian areas in Beirut), the "Hizbollah started it" childishness. Israel's mailed fist spares nobody, not even children--in the words of her acting President, Ehud Olmert, "No one will be exempt." The Fourth Geneva Convention be damned. 106 Lebanese are dead, most of them civilians.


This story says it all:

Fleeing refugees, including women and children, were cut down on a road adjacent to the Lebanese-Israeli border in an air strike as they left the village Marwaheen. The bodies of several children, one headless, were sprawled on the ground. Police said 15 were killed in the afternoon attack and an Associated Press photographer counted 12 bodies in the two cars.

Eighteen civilians, including nine children, were burnt alive in an Israeli helicopter gunship attack yesterday on residents fleeing border villages in south Lebanon, UN peacekeepers and hospital sources said. The van was carrying families fleeing the village of Marwaheen after Israeli loudspeaker warnings to leave their homes. Seven of the dead were from a single family.

Israeli forces ordered inhabitants of the border village of Marwaheen to evacuate. UN peacekeepers at a nearby UN base refused to take in the villagers, stating that they could not confirm Israel's orders. Half of those targeted in the attack were children or teenagers. As reported, "Pictures showed charred bodies of children strewn across the road."

Is this what Prime Minister Stephen Harper calls the "right of Israel to defend itself?" Is this a "measured response?" What measure is he using?

The last word to Larry C. Johnson at No Quarter (h/t Robert McClelland):


While most folks in the United States buy into the Hollywood storyline of poor little Israel fighting for it's [sic] survival against big, bad Muslims, the reality unfolding on our TV screens shows something else. Exodus, starring Paul Newman, is ancient history. Hamas and Hezbollah attacked military targets--kidnapping soldiers on military patrols may be an act of war and a provocation, but it is not terrorism. (And yes, Hezbollah and Hamas have carried out terrorist attacks in the past against Israeli civilians. I'm not ignoring those acts, I condemn them, but we need to understand what the dynamics are right now.) Israel is not attacking the individuals who hit their soldiers. Israel is engaged in mass punishment.

How did Israel respond? They bombed civilian targets and civilian infrastructure and have killed many civilians. Let's see if I have this right. The Arab "terrorists" attack military units, destroy at least one tank, and are therefore terrorists. Israel retaliates by launching aerial, naval, and artillery bombardments of civilian areas and they are engaging in self-defense. If we are unable to recognize the hypocrisy of this construct then we ourselves are so enveloped by propaganda and emotion that, like the Israelis, Hezbollah, and Hamas, we can't think rationally. We can only think in terms of tribalism and revenge.

It really can't be put much more lucidly than that.