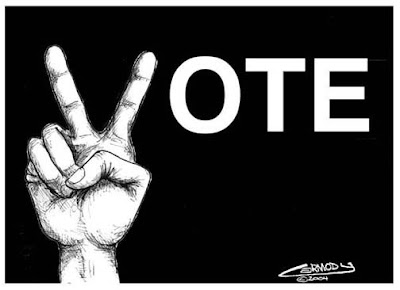 The following is my contribution to the new Great Canadian Debate. Resolved: that Canada should adopt mandatory voting to combat declining voter turnout. I'm up against Mike of Rational Reasons. (Readers will note that I don't argue an unambiguous Yes on the matter.)

Comments have been turned off to encourage participation over at the Great Canadian Debate site.

Let me note some objections to it first. As noted, mandatory voting replaces free choice with a legally enforceable obligation. But why shouldn't free citizens have the right to refuse to take part in a process if it's not to their liking? To use an analogy, shouldn't freedom of association include the right not to associate? Perhaps we don't trust government or politicians, like most citizens in fact, and want no part of the electoral system. Maybe some of us believe that "voting just encourages them." No matter who you vote for, as the adage goes, the gummint gets elected.

Additionally, why force someone to vote if they don't like any of the candidates? And wouldn't mandatory voting shore up the status quo, given that apathetic voters, herded to the polls, are not likely to support radical or even not-so-radical alternatives to what we already have? Besides, isn't refusing to vote in itself exercising a kind of vote?

All of these arguments seem, at first blush, compelling. But I think most of us are looking at the question wrongly. It's not simply a matter of forcing unwilling people to the party, no pun intended. It's a matter of fostering a democratic political culture.

After all, why is voter turnout so abysmal? Shouldn't we be looking at the causes, rather than treating the symptoms, of this disease of the body politic? What is wrong with our current political culture? Why the apathy, mistrust and cynicism about the current political system? Shouldn't we be looking for ways in which ordinary citizens can be given, and feel that they possess, a stake in the governance of this country?

Hence, this question can't be looked at in isolation. I wouldn't support mandatory voting in a one-party state, for example, because the vote would be meaningless. And I assuredly do not support it under the current voting system, first-past-the-post. FPTP is frankly undemocratic, rewarding parties with a minority of support a majority government, again and again and again, sometimes with a second-place finish in the popular vote. Literally millions of votes are simply wasted under a winner-take-all system. I see no reason to force people to cast even more pointless ballots in such an exercise. They're already cynical enough. Making them take part in a futile exercise will merely turn apathy and distrust into active resentment. It will encourage neither genuine grassroots involvement nor good electoral decision-making.

But suppose we had a system where a vote actually counted; where a variety of voices now excluded could be heard in Parliament; where groups such as First Nations, women and visible minorities could, in theory at least, be properly represented. And, more important perhaps than all of this, what if we had a political culture in which people felt genuinely involved in their political system, a vital part of it, and could hold those who speak for them accountable in ways that we can’t even dream of at the moment?

This may seem, perhaps, a kind of Utopia, although I believe that it is one that isn't outside our reach. Clearly the last part describes a mature political culture, one that doesn't simply leap into being overnight. But if we were to set the stage for it to develop, by changing from our current electoral system to a more democratic one, for example, we offer at least the possibility for all citizens to be heard, and for their views to have real effect in shaping public policy and governance.

Now, this won't happen, of course, simply by changing the electoral structure. Nor, indeed, am I one of those who thinks that proportional representation will necessarily improve voter turnout all by itself. But PR sets a minimum democratic threshold, guaranteeing at least the possibility of a more democratic culture. Life, however, has to be breathed into the new system; and sometimes that means that the old mold needs to be broken. Just as eliminating old patterns of systemic discrimination sometimes required bold affirmative measures (even quotas when all else failed), rather than mere formal or legal changes, so too does a new, more democratic voting system need to be kick-started.

Mandatory voting will, in the short term, produce the proportional legislatures that we reformers have been working for, and legislatures that every citizen will have had a hand in building. The latter realization could be the beginning of real and lasting political and civic involvement.

That doesn't mean, though, that mandatory voting should be a temporary measure. In a truly democratic system, voting should be seen as a civic duty, like paying taxes or serving on a jury. As the political culture develops, as citizens become aware of the power in their hands, the notion of not voting will begin to appear as anti-social, and mandatory voting on the other hand as good common sense. In Australia, election day is a day off; beach barbecues and other such holiday activities are the norm. Voting is seen as something one simply does, and rarely are the nominal fines enforced. This brings me to my final point.

In debates like this, questions of high principle can get in the way of mundane realities. Let's look practically at what mandatory voting entails. It's not forced labour, it's a trip to the polling booth once every few years. If you fail in this without an excuse, the worst you can expect is likely a small fine. If you don't want to vote for any of the candidates/parties on the ballot, what happens in the privacy of the polling booth is your own business. This is not the dreadful colossus of the State slapping the citizenry around: it's a just a law to encourage citizen participation in their own governance. Can that be such a bad thing, if their legislature really does reflect the way their ballots are cast?