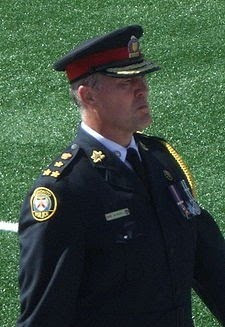 When asked Tuesday if there actually was a five-metre rule given the ministry's clarification, Chief Bill Blair smiled and said, “No, but I was trying to keep the criminals out.”

Even though it wasn't accurate, the public was left to believe the province had given officers the power to demand identification and detain anyone with five-metres of the G20 site.

All weekend there were reports of police stopping people throughout downtown Toronto — often in areas nowhere near the G20 zone — demanding identification and to search bags and backpacks.

UPDATE: Unlike my friend Chet Scoville, I'm not considering giving Dalton McGuinty a pass on this. He was in it from the very start. Their lie gave the police free rein to effect illegal searches and arrests of Canadian citizens: both of them must be called to account. "Just kidding" doesn't cut it.