Assault on a blind man 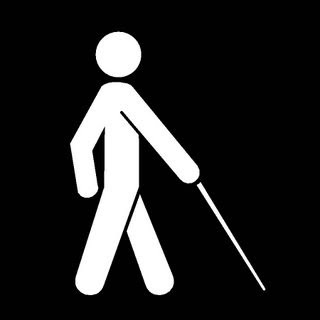 Whenever I get the bizarre idea that conservatives--or some conservatives, at least--are carbon-based life-forms, endowed with common humanity, their own disgusting antics prove me wrong. Every time.

Their latest sport is making fun of, and viciously attacking, a person for his blindness. The man in question? Dean Steacy, the competent, professional investigator of Internet hate who works for the Canadian Human Rights Commission. He was the star witness at Tuesday's hearing, another chapter of Warman v. Lemire.

Let's see what the mob are saying over at Small Dead Animals, 2007 Best Weblogs Winner:

Boys are warned that if they play with themselves, they will go blind. How did Steacy lose his vision?

Blind?? I thought he was just stupid.

In fairness, other commenters thought this was crossing the line. But let's have a look at Ezra Levant, the King of Konservative Kraziness™ and speech-warrior hero. He does character assassination with much more panache. And blind people, according to him, shouldn't be allowed to be investigators. (No doubt he'd prefer to see them selling pencils on Bank Street.)

Which brings us to the matter of Steacy himself. He's blind, and he has an assistant help him function -- no doubt a double-expense that the CHRC regards as a source of pride and a symbol of how the rest of society ought to work. I think it's great that Steacy is still working despite his handicap. But being an investigator, especially where the matters investigated are words and symbols and intricate websites, requires eyesight.

Keeping a lead investigator who is blind isn't just an act of supreme political correctness, it's an act that so obviously risks the integrity of the commission's work. Again, if it helps, imagine if an investigator hunting real crimes, not thought crimes, were blind. It's inconceivable that any defence lawyer wouldn't immediately object to any of the evidence that such an investigator collected, on the grounds that it was flawed; I can't imagine any criminal judge accepting such evidence -- if it related to anything important, it would simply provide "reasonable doubt" to any charge, and yield an acquittal. It's so ridiculous, it wouldn't even fly in a fictional TV show, even the most politically correct of the Law and Order series just wouldn't be able to have a blind investigator without fans jeering "yeah, right".

How so? Steacy has the services of an assistant, up-to-the-minute computer reading software and other aids that permit him to do his job perfectly well. Precisely what in his work or in his testimony would have required eyesight? Ezra doesn't specify, but the answer is--nothing at all.

It also raises the interesting question, posed by Jay Currie, about Steacy's office helper. Why wasn't she examined, too? She was clearly involved with every step; it would be fascinating to compare her testimony to that of her boss, to find discrepancies. In a real court, that would be done, and Steacy's assistant would be excluded from court as he was answering his questions, so as not to skew her answers. But this isn't a real court.

Why didn't Barbara Kulaszka, acting for Marc Lemire, just subpoena her, then? Was she simply supposed to show up on her own and demand a chance to speak?

Look, I think it's great that Steacy's still working after going blind -- the fact that he was the CHRC's union boss probably ensured that his lower productivity and need for another assistant wouldn't even be considered.

Leaving aside the fact that the President of a small PSAC Local is hardly a "union boss" except in the febrile imaginations of the über-hysterical Levant and far-right propagandists like Kate McMillan, what's the basis for this allegation of "lower productivity?" That sounds (and is) actionable, and in a perfect world Steacy would go after Levant in civil court. One can dream. One can hope.

I'm sure that, if the CHRC could, it would require all Canadian businesses to go to such lengths and costs. But even the nuttiest anti-discrimination advocate would acknowledge that there are some jobs where vision is necessary. Being a pilot is one of them; being an investigator is another. Unless, of course, accuracy, comprehensiveness and fairness are optional -- which is why the CHRC permits it.

As noted, Levant advances not a shred of evidence to back up his proposition that blind persons cannot be human rights investigators. All he does, in his hateful way, is suggest that such people are a burden on society, and that reasonable accommodation in the CHRC workplace is provided on the basis of a person's union office.

This disgraceful commentary reveals more about Levant's pustular character than anything else. But his words don't really surprise me. Kicking a guy with a white cane is quite in keeping with that repulsive strain of conservatism that makes alliances with neo-Nazis not just possible, but probable.

Yet there are still folks who take this bigot seriously--in fact, they fawn on him. One wonders, indeed, if such people even understand what human decency is, let alone possess any. But at least one doesn't have to wonder in the case of Ezra Levant.

To its credit, Free Dominion isn't having any part of this.

I feel this is one of the so much significant
info for me. And i'm happy studying your article. However want to remark on few common issues, The web site taste is wonderful, the articles is in reality excellent : D. Excellent task, cheers

Thanks for finally writing about > "Assault on a blind man" < Liked it!

Stop by my site: dragon on dragonvale