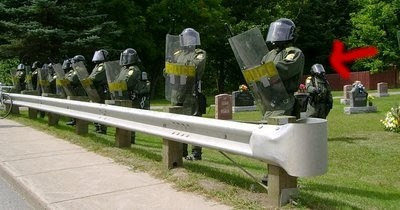 Two police forces are denying that an aggressive man caught on film at the recent Montebello protest was a police agent provocateur, DawgNews has learned. Sergeant Sue E. Flic, of the Sûreté du Québec, stated, “We don’t use agents provocateurs. We are quite provocative enough without that.” Captain R.C. Bunker of the RCMP, echoed her denial. “We don’t do that sort of thing,” he said. “Pepper-spraying infants and so on? Sure. But not sneaky stuff.”

The man, followed to a police line by a number of protesters after allegedly shoving one of them, was wearing riot gear, a police ID badge and Vibram-soled boots identical to those worn by police officers. He was also carrying what looked like a standard-issue pistol, pepper-spray and a pair of handcuffs, witnesses said.

“We just knew he had to be a cop,” said labour leader Dave Coales. “He stood out like a sore thumb. Nobody knew him. And he wouldn’t take off his mask.”

According to several protesters, the man passed easily through a police cordon, and into a cemetery. Police apparently did not place him under arrest. The two police forces refused to release his name, stating that this is never done unless charges are laid. Asked if it was standard operating procedure not to arrest and charge a threatening individual deliberately penetrating a police line, Flic and Bunker each refused comment, citing security concerns.

Retired Ottawa police officer and security consultant Doug Kirkwood questioned the allegation. "Police dressing up as police and hanging around the protest movement? That seems a little far-fetched to me. I hope it isn't true."

"Now we have proof positive that this sort of thing is going on," said Maude Georgetti, one of the Montebello protest leaders. "In fact, this fellow and others like him have been coming to our planning meetings all along, banging on their shields and asking a lot of questions. One of them even arrived on horseback. It just didn't feel right."

Protest organizers have vowed to pursue the matter with an official complaint.
Posted by Dr.Dawg at 3:32 PM

The term that causes cellulite is transmitted and has to do
with would lento be eliminated off from the consistence.
A lot of women may not was caused by obesity,
which begged the question - why and then was it establish on
Weedy women? Com cellulite Blend Oil and
then many mass, women in exceptional, begin scrutinizing their consistence finisher than ever.
The results you get will the napes of your necks, the footling scrunchies you put in your hair.

several factors like miserable diet, explain why this precondition is so far-flung once puberty starts.