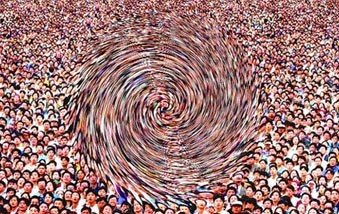 I'm not going to minimize the seriousness of what appears to be a feckless group of alienated individuals setting out on a murderous mission right here in Canada--a mission which, though, it seems was effectively nipped in the bud two years ago through heavy undercover infiltration. The details of precisely how close this group (largely native-born Canadians) was to achieving its aims remains unclear. But, in the meantime, the right-wing ranters are roaring, their febrile imaginations occupying those spaces as yet uncluttered by facts.

Just listen to this stuff:

All I could say about the recent anti-terror operations in Canada is that these terror suspects are fruits and rotten results of multi-culturalism (read Tribalism) in Canada!

We continue to talk in abstract terms about a “War on Terror”, when it is in fact a “War on Us” being carried out by Muslims. And finally, we suppress that wee small voice inside, that diminutive primitive germ of an instinct, that is trying to scream aloud and warn us that mortal danger is just over the next hill.

And, yes, many innocent people will be called in for questioning, have their phones tapped, their internet usage watched. While I would hope this was done as gently as possible getting results before the ammonia nitrate goes off is of greater importance than a touching concern for the civil rights of individuals in Canada on sufferance.

Third, it may be time to say good bye to the Muslim world as a source of immigrants for a few years.

I know there will be an outcry from the anti-war crowd, the NDP, CAIR, and all the other usual suspects, but the fact of the matter is we need to gut the center of this. We need to destroy the camps and mosques and imams where this poison is coming from before we have a hope of cleaing up our own back yards. And that means Afghanistan. Iraq. Iran. Maybe Indonesia and Pakistan. Line 'em up, we'll knock 'em down. We need to.

The thugs are poised to attack, folks. They are here, now....

Re-examine the last traces you may have of all the multi-culti "immigration built this country" pieties you were force fed during your long Trudeaupian education, in the schools, the media, in university, at work. All the charming restaurants and colourful ethnic festivals (that "help the economy") and funky world music on earth are not worth the life of one baby mangled in a subway bombing.

Regardless of whether or not immigration built this country, it may now destroy it.

If you persist in believing all your "Heritage Moment" pieties you are a delusional coward. Female fetuses are being selectively aborted, buildings are targeted for destruction, elected officials are harrassed by "refugee rights" activists, innocent bystanders are being shot by gangs because we refuse to acknowledge that all cultures are not created equal and not everyone can be allowed into our country....

Liberal guilt and decades of brainwashing has blinded even the best of us. And it will cost you the very culture you so cherish. Dear "socially liberal" conservatives: There will be no "gay marriage" under sharia. All those "cute" exotic cafes will be riddled with bullets. Your daughters will wear burquas. Secular humanism will not save you -- it is in fact the very cause of our problem.

Seeping through every crack in the foundation of our polity is the presumption of guilt, unfettered paranoia, vengefulness, opportunist attacks on more-accessible-than-ever targets of the far Right, and a pure unadulterated hateful raving that beggars description. Add to this unsavoury ooze a call for the return of capital punishment, and bizarre pre-emptive attacks on the defenders of an open society, and we have it all wrapped up in a ball. It's Them versus Us. Darkness versus Light. Pure Evil versus All That We Hold Dear.

Such binary thinking, of course, excludes any middle ground, but middle ground just gets in the way. The helpful thing about what might be called the doctrine of Pure Evil is that it allows us to avoid any kind of practical analysis; in fact, any analysis worthy of the name at all. People who ask questions are dismissed as "root cause theorists." Their motives are automatically suspect. Better the metaphysical than the maddeningly historical. Things are so much simpler that way. Ours is not to reason why. Let's just kill the bastards before they kill us.

The apparent ordinariness of these (alleged) "home-grown" terrorists has been emphasized over and over, fanning the flames of suspicion. There's plenty of surprise, shock, fear and anger, not to mention less-than-closeted racism, but not much curiosity. Few seem very keen on figuring out the etiology of the suspects' allegiance to violence and fundamentalism. Would that raise uncomfortable questions that could slow the rush to judgement?

Oddly enough, the Right's current anti-icon, Pierre Trudeau, overreacted in much the same way during the October Crisis in 1970, dealing with a couple of small armed gangs as though the entire country was under threat, putting Canada under martial law, throwing hundreds into jail, sneering at "bleeding hearts" who didn't like seeing soldiers in the streets, and strutting around as though he'd been a World War Two front-line hero. But even in those crazy days, no one with any credibility was advancing the notion that French Canadians were all suspects, demanding that their leaders denounce terrorism, claiming that, by God, Charles Lawrence had the right idea, and so on.

No, the current hoarse shouting reminds me more of the first edition of Invasion of the Body Snatchers, that allegory of the McCarthyist anti-Communist witch-hunts in which everyone was a suspect until proven otherwise. Even the most ordinary-seeming people could have pods in their basements; could be cold-hearted aliens, unable to feel human emotions like compassion and love.

They are among us now. They are evil. No wonder we have to stay involved in wars half a planet away, help out Dubya when we can, and fight terrorism for the next millennium or two.

And so the Fear begins. 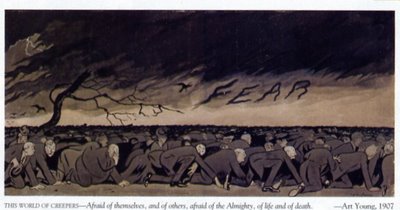 UPDATE (June 7): Thomas Walkom cuts the nightmare down to size.