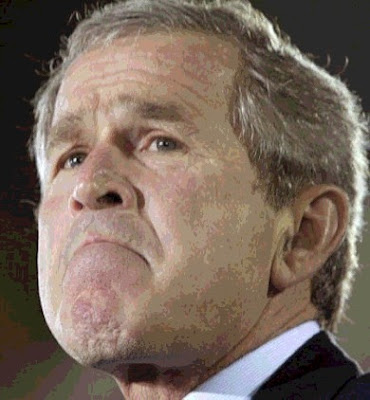 It's been a week of disappointments for conservatives--and it's only Wednesday. First, Hugo Chávez, the Venezuelan Vandal, narrowly lost a referendum on constitutional change, and gracefully conceded defeat. Then a report emerged that unstable, warlike Iran gave up its atomic ambitions way back in 2003. (Ouch. That must have hurt. Why couldn't they have discovered this after the invasion?)

Dubya, looking for all the world like Tweety telling a sceptical audience that he did, he did, he did taw a puddy-tat, is now saying that Iran could re-start the program anytime, and so the US will continue its push for more sanctions. Can't people smell the danger?

U.S. President George W. Bush refused to be deterred by an intelligence report that suggests Iran has halted its bid to build nuclear weapons, insisting that the new information only proves how much of a threat Iran is. (H/t Canadian Cynic.)

This is like making a kid stand in a corner for his whole life, because he might just do something bad otherwise. Call it pre-emptive punishment.

In any case, there's nothing worse than an enemy who fails to live up to expectations. It just goes to show how sneaky those varmints really are.

Take Hugo Chávez: that fire-breathing dictator, who wanted to change the constitution so he could run in more democratic elections than is currently permitted. Yes, he wanted a lot of other stuff too, but oddly, this appeared to be the main concern of the media. One might have expected some nimble footwork on the part of conservatives here, trying to explain away the electoral aspects of Chávez' ambitions. But actually, no footwork was in evidence at all. Abolishing term limits was denounced, in true Orwellian fashion, by commentators hailing from countries without term limits of their own--like Canada.

The difficulty, of course, was not with Chávez, but with the darned Venezuelan electors who saw this monster through eleven successful electoral contests since he came to power, properly supervised by teams of international observers. But you can't come right out and say that, and talk about democracy in the same breath. So the focus has to be on the rascal himself, indeed a right-winger's worst nightmare--a socialist with lots of money to back his plans, a crude fellow, too, not polite enough and not white enough.

But despite right-wing desperation since his ascension to the Venezuelan presidency, Chávez has held off sprouting the requisite horns and tail. Not even a short-lived coup changed that. When the then anti-Chávez Venezuelan Supreme Court let the coupsters go, he simply accepted the result. A brief attempt by the usual suspects to play the "anti-Semite" card blew up when the full text of a Christmas Eve speech by Chávez became available. One could hear the stamping of tiny feet across the blogosphere and in editorial rooms everywhere in North America, as he stubbornly refused to morph.

Here is a small sample of headlines in recent days. Remember that Chávez lost his referendum by a razor-thin margin, and conceded defeat in statesmanlike fashion. Try not to laugh out loud.

Venezuelans Bring Chavez to His Knees

Why Venezuelans Turned on Chavez

Chavez isn't finished: Voters' rejection of the Venezuelan leader's reforms doesn't mean the threat from his policies has ended.

Venezuelan voters refused to sell out to Hugo Chavez

Chavez's hopes of extending his rule could prove disastrous for US

and my personal fave (roll of drums):

What are poor right-wingers and corporate hacks and flaks to do when their propaganda shatters into tiny pieces before their very eyes? As we can see, make a whole lot more of it. And the starboard side of the blogosphere is alight as well, with frankly bizarre claims, my favourite being variations of "he rigged the election to minimize his loss." They may be running out of milk in Venezuela, but there could be tinfoil shortages right here at home if that sort of thing keeps up.

So what can we conclude about all this? "Chávez" and "Iran nukes" are constructs, lovingly assembled by right-wing pro-US spinmeisters, and they've taken a direct hit. Two Great Satans have unaccountably failed to perform. But these ghoulish figures will be patched and jury-rigged soon enough. Smoke will belch forth anew, and a thunderous and fearful voice will be relayed to us once again by the quaking commentariat. Enjoy your increased chocolate ration, and pay no attention to that man behind the curtain.